Maznah and her entire family speak Cantonese with ease. 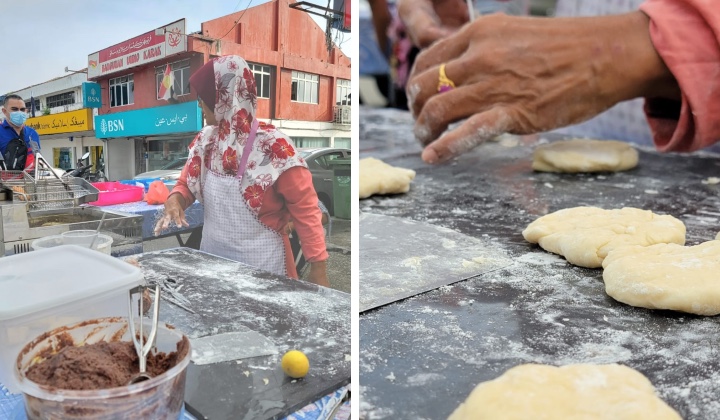 A Malay aunty selling yau char kwai (Chinese crullers) is perhaps one of the best, non-native Cantonese speakers in the country.

The senior citizen, who introduces herself as Maznah, grew up learning the language as a kid.

What was it about Cantonese that attracted Maznah?

Maznah and her whole family speak Cantonese which they learn from their neighbours.

She and her siblings grew up on an estate, where they spent most of their time with kids from other communities.

Maznah to TRP on her affinity for the Cantonese language from the very beginning.

Maznah recalled how her friends used to give her a Cantonese nickname that rhymes with her name.

While it was not flattering, Maznah said she did not take it to heart as they were all kids at that time.

Passing On A Legacy

There is a saying in Cantonese – “Saam Doi Baat Bou”, meaning things can’t be preserved over three generations.

Maznah would have liked to pass on her linguistic skills, but her daughter does not speak Cantonese at all.

She recalled how her daughter cried in her early days at a Chinese primary school because she could not adapt to the environment.

In the end, the mother relented and send the daughter to a national school.

We do whatever you can to preserve what we have, but it’s up to the next generation to decide what they want to do.

Maznah to TRP on retaining the Cantonese language.

Recently, Maznah was featured in a TikTok post as she tended to her stall in the town centre.

In the video, Maznah was making freshly deep-fried yau char kwai while talking to customers in Cantonese.

Her flawless Cantonese and friendliness earned her praise and admiration from netizens.

Netizens were also curious about how she was able to learn to make yau char kwai and speak Cantonese.

Maznah’s story also reminded many Malaysians of the happier pre 2000s Malaysia they once knew.

They lamented that back in the old days, people in Malaysia were extremely happy despite not having much materially.

Netizens said they would have good friends from all races and a wonderful memory of learning about their friends’ cultures themselves.

But today everything is so divided. The balance between the different communities in Malaysia has shifted so much.

The Australian, who was a driver for Leslie Cheung and an English teacher for Chow Yun-fat, is admired for being able to speak better Cantonese than most Hongkongers.

Is Cantonese The Same As Chinese?

Cantonese, one of the three languages in China, is spoken in Hong Kong, Macau and the southern parts of the country mainly Guangzhou and eastern Guangxi.

Mandarin is spoken in Mainland China and Taiwan, and both languages are spoken in Malaysia and Singapore.

Not all Chinese understand Cantonese as they are completely different languages and not mutually intelligible.

Cantonese are linguistically different from Mandarin and other Chinese dialects, with different words and grammar.

Without significant exposure or training, a speaker of Mandarin will understand little to nothing of Cantonese and vice-versa.

Cantonese, regarded as a “super-hard” language by the US Foreign Service Institute. is a tonal language.

It can be very challenging for English speakers who are used to speaking with emphasis (“I didn’t eat YOUR sandwich!”) and inflexion, such as rising tones to pose a question.

Is Cantonese Or Mandarin More Useful?

Generally, it is more useful to learn Mandarin as it’s universally spoken in just about every Chinese majority area except Hong Kong, parts of Guangdong and Malaysia.

In Malaysia, Cantonese is predominantly used in Kuala Lumpur, Ipoh, Negeri Sembilan, Pahang, and some parts of East Malaysia.

The fluency of one’s Cantonese varies among Chinese Malaysians as Cantonese is not a part of the education system.

Unless you have any particular interest or attachment to Cantonese, then Mandarin will be the most useful by far.

At 900 million, Mandarin is the most commonly spoken first language in the world.