Sudirman advised youngsters to choose according to their inclinations be it academics or vocational, based on their abilities. 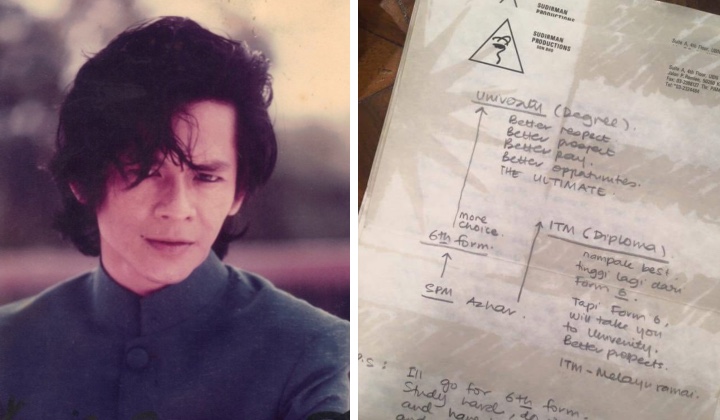 Recently, on 16 June, the SPM results were announced for all students throughout Malaysia who sat for the examination last year.

Undoubtedly, this year the students are facing various challenges
different from before due to the pandemic that hit the world.

The average social media is filled with congratulations, words of encouragement, advice, and tips for those about to embark on a new journey out there.

There are many options for SPM graduates; some are ‘random’ and do not know how to determine their direction.

It was a handwritten letter by the late Sudirman Hj Arshad, a legendary national performer in the past.

Tips that the late Sudirman once shared with one of the SPM graduate fans, Mohd Azhar Md Isa, seem to be still relevant with good advice.

The letter was written as follows:

Abang congratulates Azhar for passing SPM. But Azhar’s journey is still far away, and Azhar must be even more aggressive for the times to come.

Some people are smart with theory and can answer exam questions well; some are skilled with physical work (hand work, mechanics, etc.).

Azhar, you certainly know your own abilities. Lessons or knowledge can be gained anywhere, but more important is how we use that knowledge for self-improvement.

The goal is that everyone wants to be prosperous or happy. Carpenters, electricians, and mechanics can be that too if they know how to run their business.

The same goes for Abang. He can be a lawyer, but Abang is happier to be a singer and skilled in this field. Tomorrow can still be a lawyer.

In this world, we will succeed if we do what we are skilled and clever and can do.

In addition, Sudirman also suggested that students choose a route that can offer higher opportunities to further their studies at university.

He also advised them to draw a comparison of the options available at the time.

Malaysia’s Singing Ambassador To The World

The name of Datuk Sudirman Arshad has always been a legend in our country.

Songs such as ‘Chow Kit Road’, ‘Warisan’ and ‘Salam Terakhir’ are still sung by people.

His melodious voice also echoes on the radio, especially during Aidilfitri with the famous song ‘Balik Kampung.’

However, to what extent do we know Sudirman?

His success continued to the international stage when he won the Asian Popular Music Awards in 1989 at the Royal Albert Hall, London where he sang the hit song “A Thousand Million Smiles.”

Now, even after 27 years of his leaving us, Sudirman’s unique voice is still appreciated and admired well among his contemporaries, even the younger generation.

In 2019, Google even commemorated Sudirman’s birthday with a Doodle.

Apart from being an idol in the local music industry, Sudirman’s success is also on the charts in Singapore, Brunei and Indonesia.

His fame and success did not change his nature of being known as friendly and humble among his fans.