Ever since she outed her teacher for making a rape joke, she received messages hoping that she would fail her SPM. 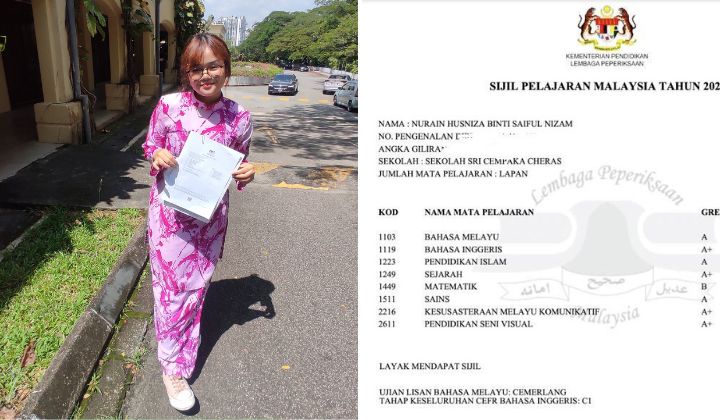 Ain Husniza, who has been harassed by her peers, school and the neighbourhood finally gets the best revenge by scoring 7As and 1B in her Sijil Pelajaran Malaysia (SPM).

When she made the headlines in April last year for calling out one of her teachers for making a rape joke in class, she was ostracised, bullied and received vile messages.

Some of the messages said she would fail her SPM because she disrespected a teacher. Ain also received a rape threat from a classmate, who later apologised.

Fortunately, she scored good results despite dealing with school expulsion, lawsuits, threats and criticisms for starting in a new school.

READ MORE: Ain Husniza And Family Forced To Move Due To Backlash From School And Neighbourhood

Ain celebrated by posting her results on Twitter with the caption: “From this to this.” She also posted pictures of the outfit she wore when she went to collect her results.

She shared that she felt down when she received all the mean messages but it also made her determined to prove the naysayers wrong.

Ain is not smart, Ain never had results like this. Ain also believed that all this is a blessing from all the teachers I met that taught me and friends I made along the way.

She added that all students should feel safe in their schools no matter what their results and ended her Twitter thread with the hashtag #MakeSchoolASaferPlace.

But in the end, it was for myself 🙂 All student, no matter what your results deserve safety in schools. #MakeSchoolASaferPlace

Netizens congratulated Ain for getting good results in SPM and wished her all the best. This made ‘Congratulations Ain’ trend on Twitter.

One of Ain’s teachers congratulated her and had great ambitions for her. The teacher reminded Ain to become a Prime Minister or Menteri Besar in the future.