The three men didn’t know each other and were helping one another with their vehicles when they saw her crying by the roadside. 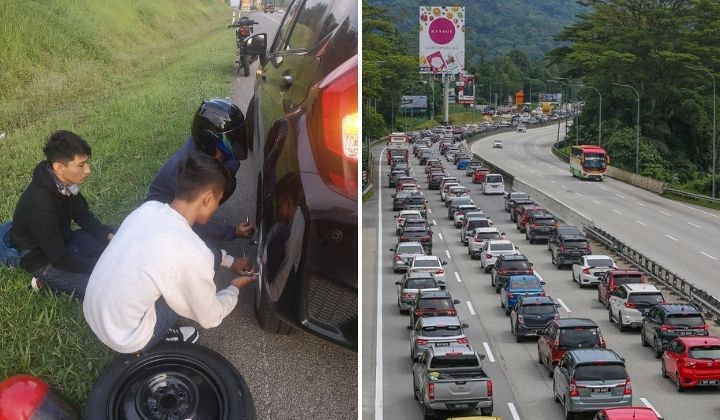 A Facebook user Tiffany Soong almost didn’t manage to get back to Johor when her car tyre punctured mid-way.

She was rushing home after a long day of work when she got stranded on a busy highway around 7pm on Thursday, 28 April.

Since it was close to ‘buka puasa’ time, she was alone by the roadside. She burst into tears in the car when PLUS hotline took a long time to answer her call.

She was surprised when three motorcyclists approached her and immediately put her guard up since she had read about scams on the road.

However, they were friendly and one of them asked if she had a spare tyre. After showing them where the spare tyre is kept, they got down to work before she could say anything.

While changing the tyres, the motorcyclists talked to each other and Tiffany realized the three of them didn’t know each other too. They found out that everyone travelled from Kuala Lumpur.

We’re not friends but his motorcycle ran out of petrol so I helped. Then we met him (third guy) who didn’t have petrol too so we helped him. Then we saw you and felt pity because you’re a woman who’s on your own so we decided to help you too.

One of the motorcyclists.

Tiffany thanked the three men for making her believe that they are still good people in the world and wished everyone a good Hari Raya celebration.

Netizens were also touched by the kindness shown by the three strangers and said the story warmed up their hearts.

They were glad to know that they are indeed kind people out there, and it gives them hope for the new generation.