Netizens laughed at the young boy’s audacity and cute interaction with the prime minister. 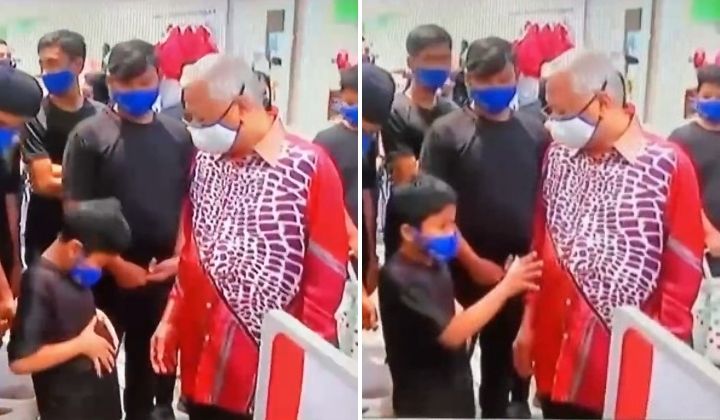 Every time there’s a major holiday, the VIPs and large organisations will hold a charity gathering or dinner as a treat for the underprivileged or orphaned children without fail.

The event is usually quite straightforward: speeches, some performances by the children followed by a scrumptious meal.

During the visit, Ismail Sabri was caught by surprise by a cheeky boy from the home and it was all caught on live television.

The young boy named Adam was seen comparing the size of his belly to the prime minister’s belly.

Adam comically used his hands to measure the size of his belly before bringing his hands close to the prime minister’s stomach to make a repeated comparison.

Ismail Sabri looked momentarily confused before it dawned on him what the kid was trying to do.

Netizens were tickled by the young boy’s audacity and comical timing on live television. Some of them joked that maybe Adam treated the prime minister like a grandfather and it’s what Keluarga Malaysia is all about.

They also said Adam is going to be popular due to his public antics and they would want to get his autograph.

While most Malaysians wouldn’t dare do what Adam did to an elder, he definitely gave a lot of people a good chuckle before Raya.

Idk why but … such a cute interaction😂