Mother was right. Tupperware is too good to lose. 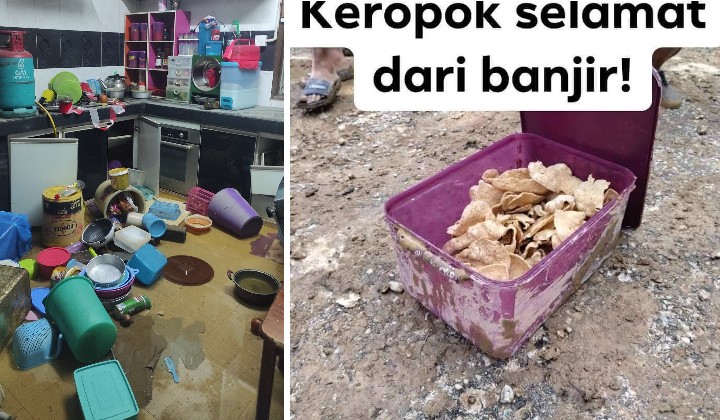 Everyone knows Tupperware, it’s a brand originally developed by an American named Earl Silas Tupper that has been widely used in households that it becomes a generic trademark.

Referred to as the holy grail of plastic containers, the word Tupperware brings shivers to our spines when we accidentally lose our mother’s prized plastic food containers.

Not just our mothers, but most people consider having a collection of Tupperware to be a valuable asset. It kind of signifies adulthood and maturity. In a way.

Well, it is a prized possession for a reason. These air-tight containers are not only good for the environment, but they are also high in quality.

Known for being extremely durable and preventing food from spoiling, this brand shows off its quality in a way we all didn’t expect.

Recently, some parts of Malaysia were struck by flash floods and a lot of citizens were affected badly by these. The cleanup process takes a lot of time, resources and energy.

However, some victims were surprised that their beloved Tupperwares kept their food safe from the water and mud. This brought them a little bit of joy and great conviction to the brand.

A Twitter user @Azfar_Az has made a thread of her findings for Tupperwares that has been affected by the flood. All of the pictures that she collected showed the outside and inside condition of the containers.

“Tupperware sales are going to surge exponentially after this. A lot of good reviews are coming from the flood victims. Walaweyh! What’s important is, they’re airtight and watertight! Hihi…” tweeted her.

Now We Understand Why Tupperwares Are The Aces Of Food Containers

Netizens also shared some of their thoughts and opinions on the brand.

“When the flood happened, all the Tupperwares drifted out of the cabinet by the water but when we cleaned it up, all of the things that were inside the container were in good condition. No wonder my mom buys Tupperware every month.”

“Tupperware shares right now: A depiction of increase in numbers”

A Mother’s Most Prized Possession

“I remember this story about my cousin. He panicked when he left his mom’s Tupperware and his dad’s G-shock watch under his table in class. He begged his sister to go back to the school just because of the Tupperware, not the watch”

“Three racks of the closet in my mom’s house, only to keep her Tupperware. When we wanna use them, she’ll give ‘the look’ first”

“My mom’s collection of Tupperware can now open a showroom. I’ve accidentally damaged her Tupperware once, she didn’t talk to me for 2 days.”

Other Flood Victims Shared Pictures of Their Indestructible Tupperware

Here are some of the pictures of testimonies given by flood victims on their Tupperwares.

Hey, at least we all know that we can always count on Tupperware.