He decided to treat a few local fresh graduates a drink to celebrate their graduation but was surprised by the different responses in return. 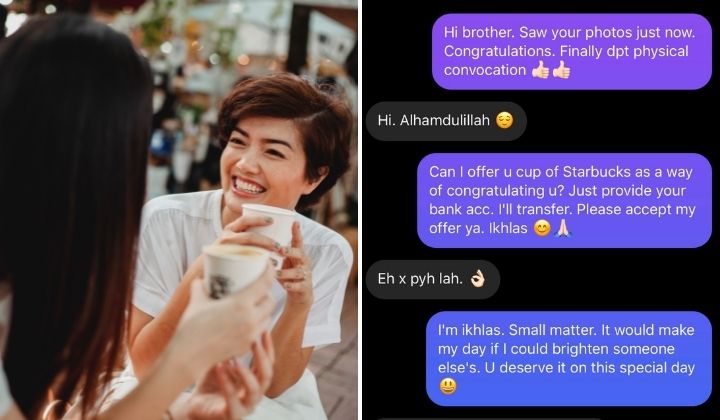 However, sometimes our goodwill isn’t reciprocated kindly and we might be taken advantage of.

A Twitter user Fye (@callmefye) shared the different responses he received when he tried to treat a few people in Malaysia to a Starbucks drink to celebrate their graduation.

During the convocation season, he randomly messaged anyone he follows or his followers who uploaded their graduation picture on social media and offered to treat them to a Starbucks drink on his behalf.

He’ll transfer them the funds and they don’t even need to meet up with him.

He received these responses in return:

According to Fye, performing a random act of kindness with no strings attached is common in countries abroad.

As proof, he shared the thoughtful note left by his Airbnb host in Paris and the kind couple who sent him to the airport for free in Slovenia.

I missed this one. One of the best thing strangers ever did to me. Kat Slovenia mmg sunyi. Lebih sejam tunggu tepi jalan x tahu mcm mana nk g airport. Nervous xyah ckp la. Then this happened. pic.twitter.com/qavrsiLnD7

However, he finds that the people in Malaysia are either wary about kind deeds or misinterpret the motive.

To be honest, no one can be faulted for rejecting the kind offer due to the numerous money scams we hear about every year.

That said, it doesn’t mean we have to stop being kind. We should continue to be kind to each other but also understand when there are people who decline our offer.