People prone to digestive problem should really take a note on this. 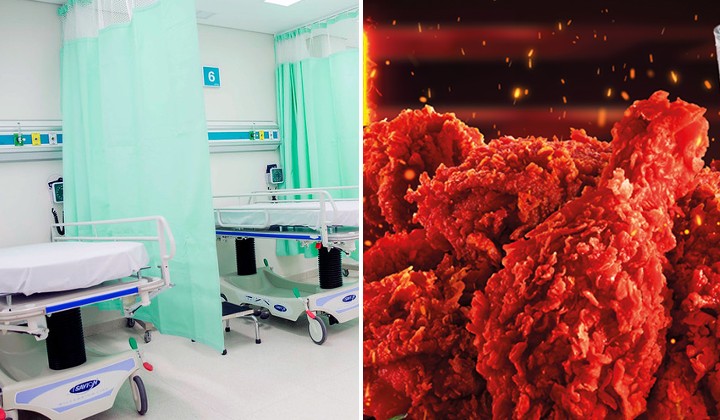 Recently, a Twitter user who requested to remain unnamed expressed her experience eating the popular Ayam Goreng McD 3x Spicy after their comeback in the fast-food chain this November.

The user described her trip to the hospital to be painful and uncomfortable.

She rushed herself to the Shah Alam Hospital because of her fiery stomach pain but then decided to change plans and go to SALAM Specialist after what felt like a long time of excruciating wait.

As soon as I registered at the emergency, they already knew my medical history that I have gastric and have previously had an endoscopy with a specialist there. The doctor confirmed that I have a serious acid reflux and gave a fast treatment.

At the private hospital, the doctor then gave 3 shots to calm down her severe acid reflux. She then explained that they asked her to rest there until it is safe to check out.

She mentioned that she will never buy the said food again and warned other people to take the food with medications on standby.

I have tried food such as the Mamee Ghost Pepper Noodles, Samyang 2x Spicy Ramen, and Maggi Pedas Giler 2x Spicy. This is also not the first time I ate McD’s 3x Spicy Fried Chicken, and I was totally fine before. But this time, what McD served is on a whole different level.

She added briefly in the last tweet that she ate this because of her love of spicy food, not because of any challenge anyone had her do. However now, she would have to be extra careful after this unbearable event.

On that note, another Twitter user commented a daring comment innocently saying that their take on the said chicken wasn’t that spicy.

This sparked a well-liked reply from another person, defending the original tweet.

“People eat spicy things because they have a high tolerance of spiciness. Even if you don’t feel the heat, that doesn’t mean that what’s ever going inside of your body is okay. Maybe now you won’t feel a thing, but you could reap the consequences later. Instead of boasting, better be careful. People do this to spread awareness, not just for show on who can withstand the spiciness better.”

READ MORE: Are Malaysians Who Crave Spicy Food A Glutton For Punishment?

The netizen further advised people with gastric, Gastroesophageal Reflux Disease (GERD), or other intestinal problems, should probably avoid these spicy food trends for their own sake as they can worsen their health condition.

One Twitter user noted that local doctor Dr. Kamarul had already raised his concerns about super spicy food in a separate thread.

The doctor said that eating spicy food (not chewing adequately before swallowing/eating too fast) and eating beyond your capacity (drinking too much water to ease down the spiciness) can lead to severe GERD which is a condition where our stomach acid can move up to our esophagus. This can be felt in the form of heartburns and acidic burps.

He added, other than GERD, too much spicy food can relate to gastritis, stomach ulcer, and hemorrhoids. They don’t directly cause these conditions, but they will worsen these conditions if a person already has them.

He further clarified that these spicy food trends can injure those people who are oblivious to these facts or for those who want to be seen ‘cool’ and accepted by their peers for doing the spicy food challenge. This issue needs to be taken seriously. We should take responsibility and stop glorifying these challenges.

Some big companies have already printed their legal disclaimer “Eat at your own risk” on their commercials, hence, Malaysians, do weigh out the risks first before eating.