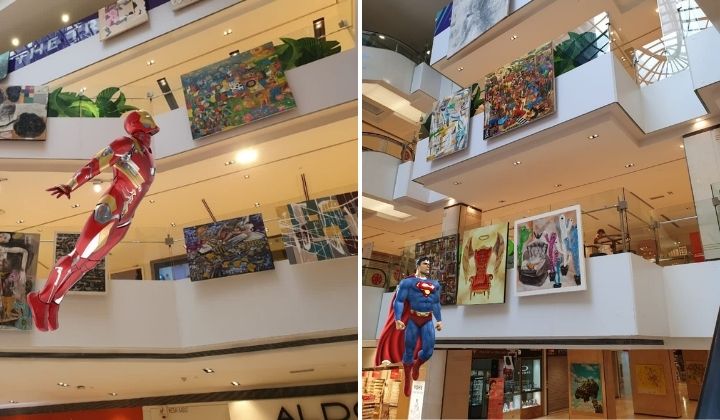 The art fair known as ARTisFAIR had a bumpy start after its opening at Fahrenheit88 mall on 11 November.

Artists and art lovers were aghast by the way the artworks are displayed and hung on the shopping mall balcony railings.

Some artists fumed online because they felt like their artworks were not treated with respect.

In pictures, the paintings were hung over three floors and many asked how were mall guests supposed to view each painting. Hint: You have to fly like the Superman and Iron Man figurines in the same area.

KL-based multidisciplinary artist Bono Stellar wrote on Twitter that she had taken down her artwork.

“Not performance art..lol just took down my own work at an exhibition that just started..no you can’t be serious abt hanging those canvases like that..,” she tweeted and attached a video showing the other artworks on the balcony.

Not performance art.. 😝 lol just took down my own work at an exhibition that just started..no you can’t be serious abt hanging those canvases like that.. 😭😭 pic.twitter.com/DLldx4qsSJ

An abstract painter Indra Gondi also wrote to say he has taken down his work. “The worst way to display artworks. I’m pulling out my pieces. This is disrespectful!”

Woke up to this unacceptable and very unprofessional behavior! The worst way to display artworks. I’m pulling out my pieces. This is disrespectful! https://t.co/WekB0Sb8Us

“That’s so dangerous and how is anyone going to look at the art?” a netizen wrote, to which someone replied, “I think the mall will provide harness, they have to do abseiling. This is really stupid.”

I think the mall will provide harness, they have to do abseiling 🤣🤣. This is really stupid

A netizen wrote to say they were under the impression through the ads that there would be a dedicated exhibit space.

Is this at Fahrenheit? From the ads I was under the impression there would be a dedicated area for the exhibits. 🤔

Another netizen asked whether they were supposed to fly to see each artwork.

A Facebook user wondered if a forklift would be provided at the exhibition.

Another netizen said that the art fair was clearly “organised and approved” by people who do not understand and appreciate art.

Someone even said the mall is treating the artist’s hard work as decorative fillers while another netizen said that the artworks were hung up like laundry.

To be fair, ARTisFAIR’s official website did state they aim to move away from “conventional presentations of art” but they may have gone a step too ‘high.’

The artworks have been moved

According to The Star, fashion designer Datuk Seri Bernard Chandran who’s the co-creator of the art fair said the artworks are now moved to a gallery space in the building after discussions with some artists.

Chandran said none of the other artworks have been reclaimed by the artists except for Bono Stellar.

He also said some of the artists are pressured because if the artists don’t request to take down their art, “the galleries threatened them” and said they’ll not represent the artists anymore.

Some of the galleries representing these artists think it’s not a good idea… it’s making them look cheap. But this is a creative process… when you create something new, some will have certain opinions about it.

The fair co-created by Bernard Chandran and BookXcess co-founder Andrew Yap is an affordable art fair featuring more than 2,000 artworks by over 500 artists from Malaysia and Indonesia.

The art fair aims to make art accessible for all but as we could see, it accidentally became too atas.

Many of the artists aged between 18 and 65 are not affiliated with any major galleries. Mall guests can still view the artworks in the new gallery until 28 November.