Malaysians are scared of lizards in their food, but when lizards ARE food, it’s okay. 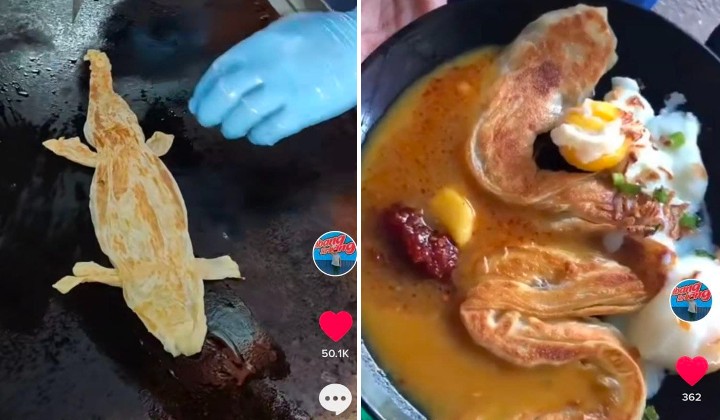 TikTok user @abangterbang has set the bar high on creative ideas for one of our national food, Roti Canai. This guy is just on the next level.

On his viral TikTok video of the ‘Roti Canai Biawak‘, he showcased his skills in making a replica of the infamous reptile crossing the streets of Malaysian roads, the ‘Biawak’.

We are quite stunned to see the amazing features of the animal that his hands naturally shape.

Chill. It’s not what it looks like. We mean, yes, it does look creepily the same, but it’s just the shape. However, the resemblance is uncanny, right?

Again, no worries, no monitor lizards or any other reptiles are harmed during this video.

This is not the first time

He’s done it again before. And he’s doing it again.

His previous posts gained a lot of attention too for he tried making different types of Roti Canai with a creative twist.

He showed videos of how the dishes were done and it is actually quite interesting as you can get lost in his Roti Canai content.

He’s been trying to figure out fun content for his TikTok account and got inspiration from his fans in the comments.

It’s not how he gets the name is that matters, it’s how he flawlessly executed the shape of the dish.

He’s no Pablo Picasso, but we’ve got to admit, it’s pretty creative. This guy should have his own reality TV show. Just saying.

Apart from the gripping video, the comments are equally entertaining to read too. Plenty of netizens were awed by his skills and found his creations highly amusing.

“I’m worried that it might walk [out of the plate],” a netizen commented.

“It’s creative but the music is chilling the armpits out!” a person wrote, as the chef used the Amityville Horror audio for his video.

“Bro, do one with a ‘pocong’ (shrouded ghost) where there’s one tied above [the head of the corpse] as well as below [the leg],” commented a TikTok user. I bet we’re all keen on seeing this one, right? 😉

“Boss, the seabass one, got aaa? I hear it’s viral now,” joked another netizen on the comment section.

He served the dish with two perfectly half-boiled eggs, along with some gravy, sambal, and garnishes on top.

It may look quite daunting but, we bet it tastes delicious!

His restaurant is located in Kuala Pilah, Negeri Sembilan. For those of you who are craving for creative Roti Canai menu, do drop by his place. And do a review for us while you’re at it too!