The father was worried his son would get robbed or cheated on. 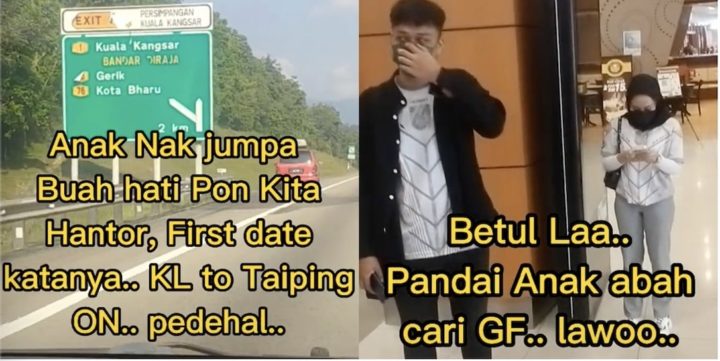 Not many people can say (or will at least admit) they were personally accompanied by a parent to their first date.

But for TikTok user @remydamak’s 18-year-old son, the first date was not only documented for thousands to witness, but RemyDamak personally drove his son all the way from Sungai Buloh to Taiping, Perak!

The 49-second video posted two days ago (18 October) currently has over 60,000 views and is a modern-day love story between a girl father and boy son.

A story that begins during MCO

TikTok user @remydamak, or Mohd Jasni Mohd Noh, revealed his son had met the girl during the Movement Control Order but neither had ever met the other in person.

Like a thoughtful 18-year-old (cause face it, at that age, most of us are not), Jasni’s son asked for permission to meet the girl but like any father would, he was hesitant to let him go because she stayed in Taiping.

I explained to him that I was worried because he has never seen this girl in person and of course I’m scared for his safety that he would get robbed or cheated on.

A story that continues with interstate travel opening

The date took place on a Sunday, about a week after interstate travel was allowed.

In the video that went viral, Jasni is seen documenting snippets of the road trip to Taiping with the whole family in tow.

He even snuck a sneaky shot of his son fixing his hair as soon as they arrived and clips of him nervously waiting for his date while already in the shopping mall.

Finally, Jasni’s son’s date arrives and after a few awkward shots of the two together, the two lovebirds go on their date at Starbucks while the rest of the family enjoy chicken rice.

Better relationship with his children

Apart from safety and wanting his son happy, Jasni added he wanted to build a healthier relationship with his children after having a not-so-good one with his own family.

When he asked if he would take the girl to be his daughter-in-law, he said the decision is up to his son.

Father of the year?

While this unusual act may not swing with other families, netizens were supporting Jasni and called him a ‘sporting father’.