It’s like getting front-row seats to a rock concert! 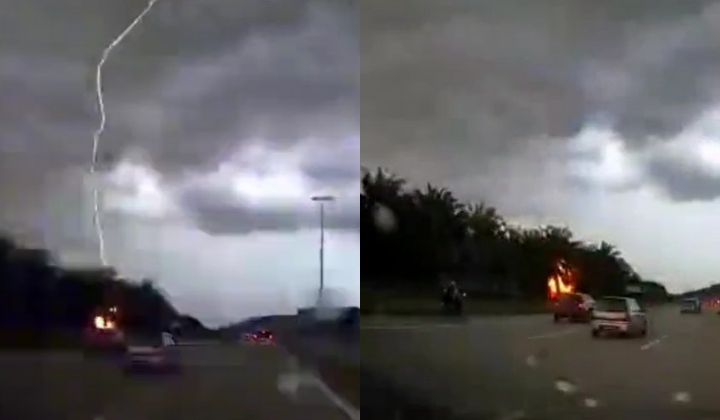 Lightning strikes usually happen far away from us but this lucky Tiktok user got a front-row seat to nature’s rock concert.

In the video uploaded by @kejutartora, motorists could be seen driving on the highway on a stormy day.

Suddenly, a bolt of lightning hit the row of oil palm trees by the roadside with a loud boom. The ground even lit up with fiery sparks for a while.

It was a close shave but luckily, no motorists were hit or injured by the lightning strike. Everyone managed to continue on their journey safely.

While it looks like a scary video, it’s hard to ignore that the timing of the lightning complements the rock song included in the Tiktok video.

Netizens also shared stories of their near-encounters with lightning strikes in the comments.

“I’ve seen it [lightning] in front of my eyes before. The lightning directly hit a motorcycle passenger. Until today, I can’t see lightning. Auto trauma,” a netizen wrote.

“I saw a lightning strike once in front of my own eyes. So much glare,” someone else commented.

A few netizens humorously asked if it was Marvel’s Thor or Mortal Kombat’s Raiden arriving on Earth for real.

According to NBC 12, the safest place to be in the event of a potential lightning strike is to stay inside a car or inside a sturdy building. Contrary to popular belief, it’s not the rubber tyres of the car that protect the people inside.

That said, a convertible offers no protection at all because it’s not entirely covered by a metal cage. The more you know.