The government would make life very difficult for people who chose not to be vaccinated for non-medical reasons. 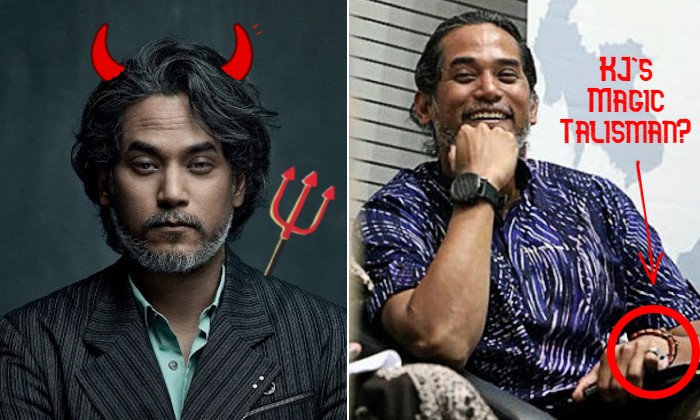 From being called a bully, to being accused of allying with the devil, Health Minister Khairy Jamaluddin Abu Bakar (KJ) sure is under a lot of heat for taking a hardline stance against anti-vaxxers.

After saying that the government would continue making life difficult for people who say no to the Covid-19 vaccine, it appears that the minister is now the target of ‘spiritual’ attacks from people who want to see him dead.

KJ had over the weekend shared some dark, but hilarious screenshots of a few conversations he became privy to which was supposedly posted on a couple of local anti-vaxxer Telegram groups.

In another message, the groups had even accused the minister of using sorcery and trinkets to protect himself from such prayers and spiritual strikes.

KJ wears a talisman on his left arm. He has four demonic jinns he uses to protect himself.

In response, the minister wrote that he actually made a different deal with the ‘devil’ in order to ensure that our nation remains immune from any dark threats.

Meanwhile, the National Union of Bank Employees (NUBE) had slammed the minister for what he said about making life difficult for anti-vaxxers.

NUBE General-Secretary J. Solomon reportedly said that the government’s stance against people who refused to be vaccinated feels a lot like gangsterism.

He said that the assumption that people who are not vaccinated would inevitably endanger the health and lives of those who have been inoculated was false and urged the government to respect people’s rights not to take the jabs.

Countries like Singapore and Israel have even revoked their original policy of the vaccine passport for travel as they realise that there is no epidemiologic value as the number of infections has risen sharply among the vaccinated.

Anwar argued that the government needs to persuade people to take the vaccine instead of forcing them to do so.

I don’t back anti-vaxxers, but they argue the case against vaccines well. So we need to counter them by putting forward stronger arguments. If they cite scientific studies, we need to respond with studies that carry more credibility to convince them. There is no need to threaten them.

KJ had on Saturday (16 October) said that life would get very difficult for people who chose not to be vaccinated against Covid.

“You cannot dine in at restaurants, you cannot go into shopping centres. If you choose not to vaccinate yourself then we will probably ask you to do regular tests that you have to pay for. The message is to get yourself vaccinated,” said the minister, explaining that the ‘new normal’ rules would only provide exemptions for people who cannot be vaccinated due to medical and health reasons

If you cannot be vaccinated, that’s fine. We will give you a MySejahtera digital exemption. But if you don’t vaccinate yourself by choice, we will continue to make life difficult for you

Responding to these so-called pundits, KJ implied that the government has done all it can to be nice and educate denizens about the importance of vaccinations, and would continue doing so.

The minister noted that people can call him whatever they want if it means that he was doing his job.

I’m sorry I have to be firm on this issue. Call me dajjal (a false prophet in Islamic theology similar to the antichrist) or whatever.