Ebit Lew made a name for himself with his philanthropy. 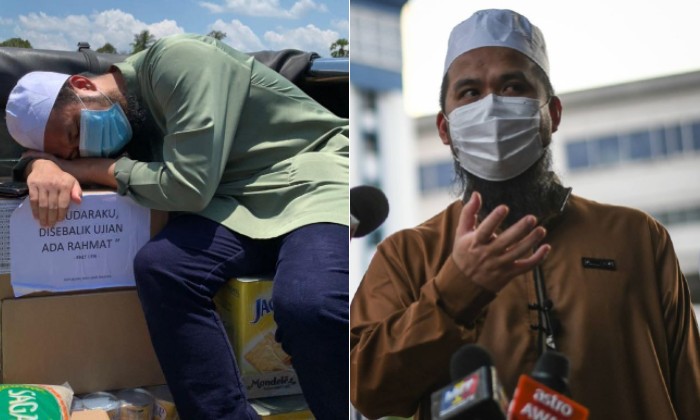 A celebrity in his own right, the Ustaz became sort of a cultural paragon for his philanthropic humanitarian efforts, especially during the height of the Covid-19 crisis.

Heck, even we here at TRP couldn’t help but capitalize on the Ustaz’s fame to write a couple of stories highlighting the charity work he had done because people seemed to be impressed and like him so much.

Read More: Who Is This Ustaz Ebit Lew That The Agong Personally “Belanja” To Lunch?

But now it looks like public opinion on Ustaz Ebit Lew has been tainted by allegations of mismanagement, exploitation and a sexual harassment scandal that has people thinking up all sorts of theories.

To keep things from getting convoluted, let’s start with Ebit’s recent humanitarian mission to Palestine.

The Ustaz made news headlines in June 2021 for being the first humanitarian effort team to enter Gaza after the Palestinian-Israel conflict that erupted in May.

Reportedly, his team was granted permission to pass the Rafah Crossing Point between Egypt and the Gaza Strip, escorted by a convoy from the Egyptian military and received warm welcomes from Palestinian government officials.

There, the Ustaz was seen touring the ruined city whiles distributing aid to the people of Gaza which included, among other things, food, medicine and toys for children.

He even got himself an award for being Palestine’s ‘Goodwill Ambassador’, given to him by the good people of Palestine before he went home.

Now here’s when things start to get a bit heated.

But before even setting foot in Palestine, the rapper was said to have picked a bone with the Ustaz.

He had questioned the Ustaz’s means of entering Gaza and the source of Ebit’s fundings during the entire mission.

Rumours were also spreading around that the Ustaz had paid off large sums of money in order to get into Gaza as well as word that Ebit was using misappropriated funds for the trip.

This resulted in Ebit lodging a police report naming Caprice and Nadir when he got home and said that the accusations made against him were slanderous.

Apparently, PDRM had even asked Interpol to help locate Caprice and Nadir who were still overseas at the time and bring them home too.

The case was investigated under Section 500 and 504 of the Penal Code for defamation and criminal intimidation and Section 233 of the Communication and Multimedia Act 1998 for the misuse of online services.

All three individuals have reportedly provided their statements to PDRM, and Caprice had even publicly apologised to Ebit for the controversy.

More recently, Ebit became the subject of an ongoing sexual harassment investigation which reportedly involved leaked conversations and lewd videos between him and his victims.

The scandal was apparently brought to light when another independent preacher, Firdaus Wong Wai Hung – who people also refer to as Ustaz – shared allegations of Ebit’s supposed dirty deeds online which contained screenshots of text messages, voice recordings and even clips of a person resembling Ebit with his genitals exposed.

This prompted many to figure out if the footage of the Ustaz was real or a ‘deepfake’ – a digital recreation made to look like Ebit in order to ruin his reputation.

Here, Caprice again stepped in to provide his views on the matter.

This one, it is clear that you can see the bird (genitals) but there are still those who say its ‘deepfake’. Malaysia, since when can you deepfake birds?

The case is being investigated under Section 509 of the Penal Code for the offence of insulting a persons modesty, Section 14 of the Minor Offences Act 1955 for indecent, abusive or insulting behaviour, and Section 233 of the Communications and Multimedia Act 1998 for the misuse of online services.

Police have also taken statements from the victim in the scandal case but didn’t reveal their identity.

Ebit had publically denounced the allegations made against him, saying that it was cruel.

People have also started accusing the Ustaz of taking advantage of the workers at his chain of convenience stores, Elewsmart.

Anonymous posts by people claiming to be former staff members of the store had confessed to being subjected to unfair pay cuts and deductions.

Images shared online showed supposed conversations and even copies of the payslip given to employees.

It’s said that some workers salaries were deducted by close to 70% and other staff members were fired for being accused of not doing a good job.

As far as we’ve checked, Ebit is yet to respond to the allegations.