Ebit Lew has been actively involved with humanitarian work for over 12 years. 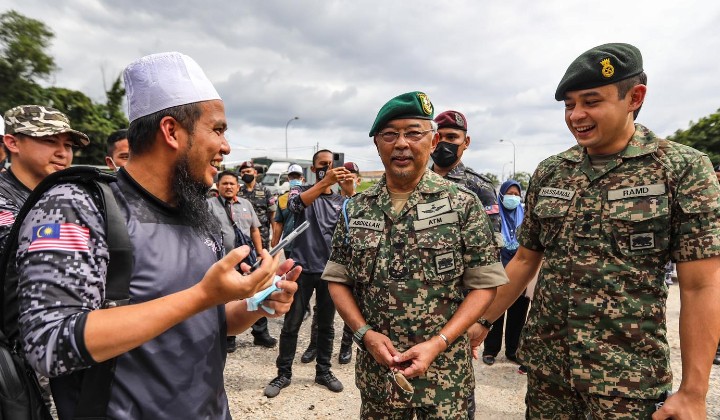 Celebrity preacher and philanthropist Ustaz Ebit Lew recently got the honor of having lunch with the King and Queen in Pahang as they were there assisting flood victims.

He also shared a meeting with the Crown Prince of Pahang Tengku Hassanal Ibrahim Alam Shah Al-Sultan Abdullah and said that the YDPA had personally thanked him for the charity work that he’s done for the people of Pahang.

As the ustaz is always seen busy helping those in need, we take a brief look at his background and why some might say that he deserves more praise than the government.

Born in Muadzam Shah, Pahang in 1984, Ebit Irawan Ibrahim Lew or formerly know as Lew Yun Pau, converted to Islam at the age of 12 and is a graduate from Universiti Putra Malaysia (UPM).

With over 12 years of experience doing charity work, the ustaz famously appeared as the host of his own TV program called “Door To Door Ebit Lew”, which focused on providing humanitarian aid to people on the street.

Besides owning his own training and consulting agency and the author of several motivational books, the ustaz is well known for his outreach programs where he tries to gain a better perspective of the world from today’s youths and the everyday problems that they face.

From visiting nightclubs to speaking with marginalized groups from the LGBTQ community, Ebit has helped highlight the life and struggles of ordinary people living across the country.

Ebit is also the owner of Elewsmart – a food bank offering cheap or free groceries to low-income families – which he intends to expand across the country.

With the advent of the Covid-19 pandemic and the enforcement of the Movement Control Order (MCO) in 2020, the ustaz had made it his mission to provide assistance to those who ask him for help with his own money and the donations he received from others.

He was even given special permission by the police to conduct his charity work during the MCO and accomplish such notable deeds as;

Ebit has also been actively providing assistance to people affected by the floods throughout the country.

According to the ISEAS-Yusof Ishak Institute, in Malaysia, a person is required by Syariah law to possess a valid preaching licence in order to give sermons to the public.

While it is difficult to ascertain if he was given a permit to preach, Ebit Lew was invited to preach in different states of Malaysia that have strict rules against preachers ascribing to the beliefs of Wahabism.

With his social media channels actively posting images and videos of his charity projects, Ebit was recently accused of being a “showoff” and was even called into questioning by the police for the work he did during the MCO.

Ebit came to explain his intentions to attract more people to be involved with charity work and encourage everyone to help those in need.

I just share on Facebook on Instagram. I want to reach a lot more people out there, many need help. I include my number for people to contact. When we show good examples, hopefully, more people will help.