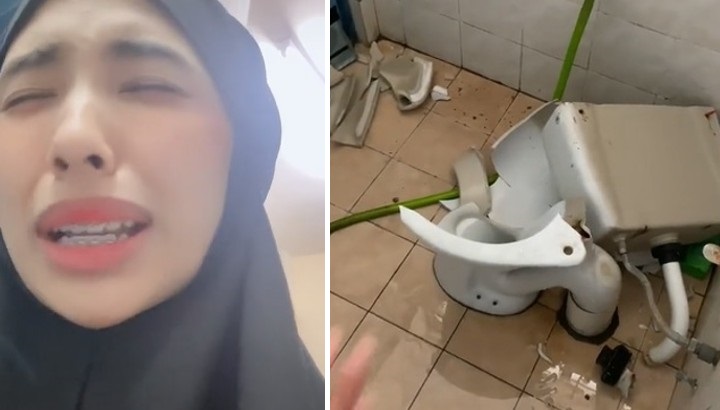 Sometimes the horror happens before the act of relief.

One such case happened with a woman known as Syiera Eyya who posted on her TikTok an incident where the toilet bowl in her bathroom had shattered into pieces as she was about to use it.

The video shows the toilet in pieces with Syiera’s hand visibly shaking from the terrifying incident but heard saying that thankfully it hadn’t fallen on her head, referring to the elevated cistern mounted to the wall.

She was purportedly washing her hands when the tank had fallen from the wall and shattering the toilet beneath.

Events leading up to the incident

According to Syiera, she had noticed a crack on the wall near where the toilet tank was mounted but had forgotten to tell the housing management.

She also noted the toilet tank was screwed AND glued to the wall for stronger reinforcement. However, said the crack must have weakened the tank’s structure.

Indirectly saved by her cats?

On that fateful day last week, Syiera was helping her mum who works at a café nearby by their home, when she got a stomach ache.

As her home was nearby, she headed back to use the bathroom.

When she got home, she decided to feed her cats first then washed her hands in the bathroom sink after, right before the toilet shattered.

She was NOT squatting on the seat

Syiera would like to clarify that she was not squatting on the toilet seat and has never squatted on one before.

Alhamdulillah I was not injured, just a bit shocked. Incidents like this are dangerous, I advise everyone to always be aware and remember that the toilet bowl has its limits, and it cannot handle high impacts and that includes squatting as well.

Her video has now been seen over 38k times and her TikTok bio has since been updated to say that she is okay, it’s the toilet that’s not.