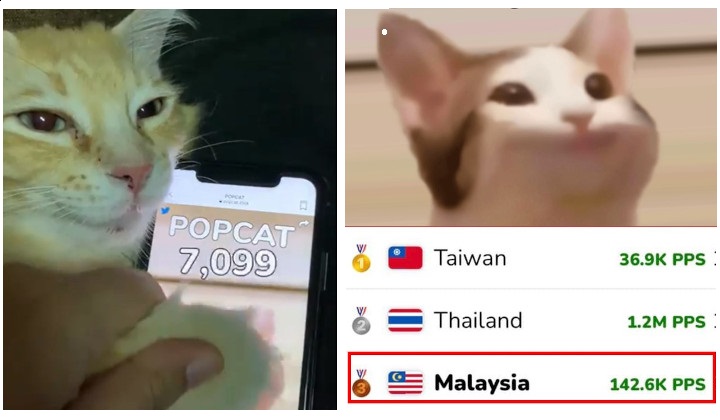 Malaysia is currently battling with Thailand and Taiwan for a seat in the golden throne of the useless but addictive web app POPCAT.

Pop who? Popcat, a popular clicking game where you either click (on your computer) or tap (on your phone) a cat named Oatmeal for points.

On Friday, we made the top 10 but in the true spirit of “Malaysia boleh”, here we are currently in 3rd place.

Did someone say free burgers?

A Facebook post by home-grown Malaysian burger joint myBurgerLab (mBL) yesterday (14 August) said that if Malaysia gets to number 1, they will treat us to burgers!

And you know how Malaysians are with free food.

Now if all those who engaged in the post did their part to play the game and scored at least 1,000, we’d easily get 7 million to our score.

When Malaysia does get to number one, mBL said they will issue the voucher in the coming days via their app.

It even caught the attention of Syed Saddiq

Even Muar MP and former Youth and Sports Minister was taken aback by Malaysia’s unrelenting efforts to win with a tweet displaying three ”face exhaling” emojis.

Turns out Syed Saddiq’s supporters are also big fans of POPCAT with one Twitter user replying to his post with her ‘Oyen’ playing the game.

Blink and you’ll miss it

The tallying of clicks is in real-time and so quick that we might even miss the moment Malaysia makes it to number one.

But seeing how competitive we are, we’re sure that someone will capture the moment and victory will finally be ours!

As a whole, Malaysian Netizens “get it”. The sense of unity is strong in the three “S”s: Sport, (thrashing on) Singapore, and now silly games/social media:

The few things that unite us as Malaysians: watching Lee Chong Wei play, trashing on Singaporean food and trying to become number 1 on PopCat.

Some even feel they’ve done their part as a patriot like one of TRP’s very own readers:

Whatever your stance is on the game, we should consider ourselves lucky we still have our sense of humour. Some countries don’t have that kind of luxury it seems (hint: look at the very bottom of the leaderboard).

Want to keep Popcat going? Help the developers by donating money for their server fees here.

GE15: Here’s All You Need To Know About Syed Saddiq

‘We Are Not Scared’, Says Syed Saddiq After Court Orders Him To Enter Defence