10 bikers, a lorry and several other motorists joined in the slow-speed pursuit in order to rescue the dog and escort it to safety. 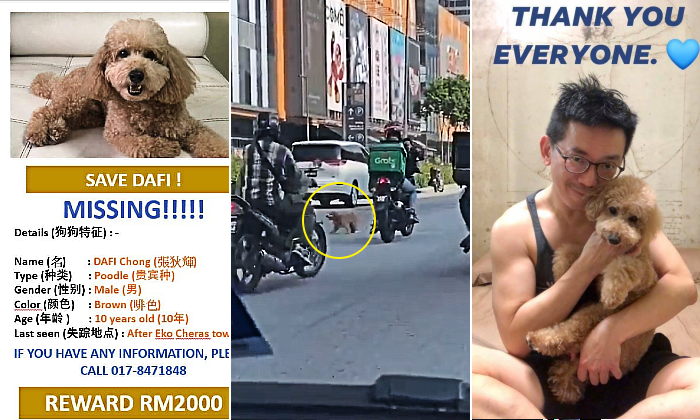 Freedommmm! must’ve been on the mind of Dafi, the brown poodle, who made a daring dash to nowhere on a busy stretch of the MRR2 Highway in Cheras, Kuala Lumpur, recently.

A series of viral videos that had Malaysians overloading on cute aggression saw Dafi as the main character during a long and arduous motor chase to get the canine off the road.

Refusing to be caught, Dafi ran circles around it’s pursuers, even causing one man to trip and fall on his belly in an attempt to capture the animal.

At the end of the video, as many as 10 bikers, a lorry and several other motorists joined in the slow-speed pursuit in order to rescue the dog and escort it to safety.

Last the puppy escort everyone to be behind it!! Like all the drivers were following the puppy. The best part 😭😭😭😭all the Malaysian helped out. Everyone. To Malays to Indians to Chinese. Yoo!! Malaysia is going well with young generations😭😭😭 yoooo I am so happy forreal pic.twitter.com/5YPMvjQqbM

On April 14, Dafi had escaped and ran away from a local Petsway pets hotel in Taman Segar after it was placed there by its owner Steven Chong who had to go away for work.

Following the viral video, Steven had put up a ‘lost dog’ posting on social media asking for information on Dafis whereabouts with a RM2,000 reward.

Dafi was finally reunited with Steven on 26 April, thanks to the help of a Mr Siva who was said to be one of the motorcyclists in Dafi’s chase video.

Apparently, Mr Siva not only managed to get Dafi to safety, it is said that he also fed the animal some tasty treats before it finally found its way back to Steven who is eternally grateful to be together with his lovable pet again.