The Myvi had “flown” about 50 metres off the road, over a huge drain, and into a tree. 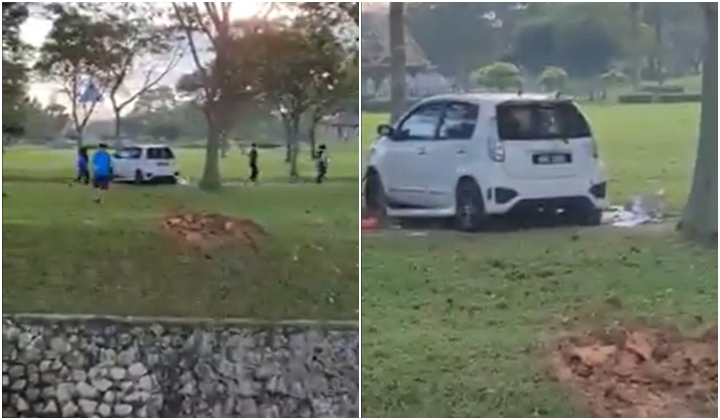 When it comes to the strangest car accidents in Malaysia, somehow a Perodua Myvi always makes an appearance. So, Malaysians online couldn’t help but to exclaim in shock and bemusement when an accident involving a ‘flying Myvi’ at Johor Bahru yesterday went viral.

Short clips of the incident have been circulating social media, indicating that the Myvi had skidded off a road and flew over a massive drain before ramming into a tree.

As it was with any case of a bizarre Myvi accident, reactions to the clip were filled with much confusion and humour.

So what actually happened?

While the thought of a flying Myvi seems funny, the accident itself was no laughing matter.

According to the Iskandar Puteri Fire & Rescue Department, the accident took place around 3am on Monday (22 March) at Taman Bukit Indah in Johor Bahru.

The driver was actually pinned in the car after it rammed into a tree and the Fire & Rescue Department had to use special equipment to extract the victim from the car.

Iskandar Puteri OCPD Asst Comm Dzulkhairi Mukhtar said that the victim, a 27-year-old man, had lost control of the car while entering a roundabout and drove straight off the road before “flying” about 50 metres into a tree.

The victim sustained injuries to his face, hands and left leg and is currently admitted at Hospital Sultanah Aminah for treatment.

According to the police, the victim was not intoxicated or under the influence of drugs but they are investigating the accident under LN166/59 Rule 10 of the Road Traffic Rules.