A video shared by British media company UNILAD features a traditional village healer in Kota Bharu who has “magic hands” that can put your muscles back into place. 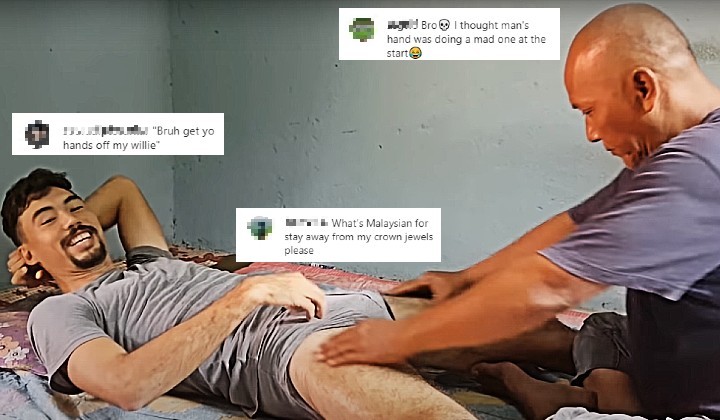 The internet got a kick out of watching Kedah FA player David Rowley getting a traditional Malaysian massage to treat a “tight groin” he suffered after one of his matches.

A video shared by British media company UNILAD featured the 30-year-old Australian born midfielder taking audiences on a trip to Kelantan where he meets with Abe Pa, a traditional village healer in Kota Bharu who he says has “magic hands” and can put your muscles back into place.

Rowley said that his former teammates from Kelantan recommended the treatment and had themselves been visiting the healer for years.

Footage of the massage therapy showed Rowley painfully moaning and twitching about as the healer’s hands rubbed and stroked his lower body.

“What’s the problem?” Rowley asked Abe Pa as the middle-aged man massages his inner thighs. The healer explained that Rowley was feeling pain because his legs were “tight” and he had a “pulled muscle”.

In the comment section, a number of playful viewers cried foul over the contents of the clip, saying that the healer’s hands were a little too close to the footballer’s “goalie”.

While others were doubting weather the traditional therapy was even legit.

Can you put “things” back in place?

According to chiropractor Randeep Singh Manocha, it is anatomically impossible to manipulate or “pull back into place” the position of the human muscle and tendons without causing serious injuries or through surgery.

Muscle tissue is such that it either gets strained or it tears if subjected to any type of stress or trauma. Even when someone says they’ll click or crack your back. And the sound that you hear is a bone going back into place.

Speaking to TRP, Randeep explained that most people commonly confuse their pain and injuries and can’t really tell the difference between the internal parts of their body.

Sometimes even they’re not sure what they mean, that is whether they mean (the) nerve, vessel, muscle (or) tendon… These things can often present with similar symptoms. That’s why when patients come in we do a thorough exam to determine the cause first. Then, start treatment.

However, the chiropractor does confirm that you can indeed relieve muscle pain by getting a massage.

Yes, you can pull (or) strain a tendon or muscle. Tendons connect muscles to bones… So when you pull a muscle (or) tendon, massage kind of helps, depending on the extent of an injury.

Traditional massage – as old as civilization itself

Historically, massages and other traditional healing methods have been practised by cultures around the world for as old as civilization itself and is even considered by the World Health Organization (WHO) as a complement to modern medicine.

Here in Malaysia, researchers note that traditional Malay healing techniques such as massages or “berurut” as we locals call it, have been passed down and practised since the 19th century.

The basis of Malay massage techniques is said to focus on “angin” or wind as well as the “urat” or veins – the nervous system or lymphatic and blood vessels. During treatment, the masseuse would expel the angin from a person’s body by kneading and massaging specific urat and body parts.

TRP attempted to contact Abe Pa for more information on his special massage techniques. We’ll be sure to feed you the deets once we have em’.

You can also check out Rowley’s full body massage experience he posted on his personal YouTube channel in 2019.