Both incidents are being investigated under the Child Act 2001 for child negligence and endangerment. 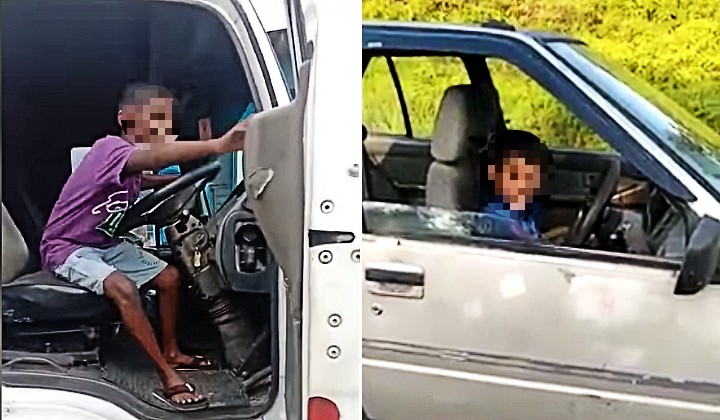 Two children were caught driving a lorry and a car in Negeri Sembilan, over the weekend.

In two separate viral videos making doughnuts online, one underaged boy was recorded behind the wheels of an oil tanker, while the other was driving around the kampung in a beaten up Proton Saga.

A boy who looks to be between nine to 10-years-old was videotaped parking a six-wheel Hino oil tanker in Rantau.

The one-minute video started with a lorry slowly maneuvering back and forth in what appears to be a garage. It was at this time that viewers should notice a slight oddity as a tiny head suddenly pops out of the driver’s side window for a closer look at the parking spot.

When the vehicle was parked, the man recording the video then walked up to open the lorry door, revealing the boy-driver who quickly shied away from the camera.

Police are now on the lookout for the boy and the man who recorded the video with the incident being investigated under Section 31 of the Child Act 2001 for ill-treatment, neglect, abandonment, or exposure of children to a manner likely to cause physical or emotional injury.

Meanwhile, roughly 20 kilometers away in Rembau, a nine-year-old boy was spotted enjoying an afternoon drive on a village road in Kampung Bongek, all by himself.

In the 50-second video, the boy was apparently stopped on the road and questioned by a passerby.

The man behind the video was heard asking the child where he was headed, how old he was and who taught him to drive.

To which the smiling boy replied that he was in standard-three primary school, learned how to drive from either his father and his sister and was out for the day to go “jalan-jalan”, before pulling away at speed.

Since the video went viral, it was reported that police had caught up to the boy and had issued his father with a summons under Section 111 of the Road Transport Act 1987 for abetting or instigating a crime.

Apparently, the boy had gone out driving without the knowledge or permission of his 47-year-old dad.

The case is also being investigated under Section 31 of the Child Act for neglect.

Let’s all try to avoid having any more baby drivers on the road in the future, shall we…