Here’s what the law said. 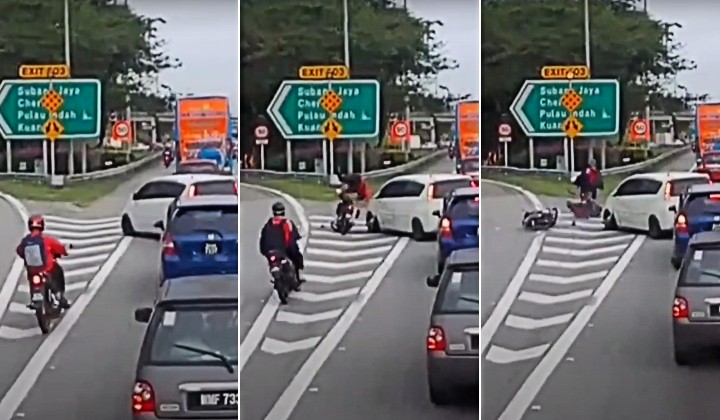 A viral video from a recent accident on the North-South (ELITE) Expressway has Malaysians arguing over traffic rules.

Dashcam footage from the accident revealed a gruesome collision between an MPV and two motorcycles.

In the 50-second video, a white Perodua Alza is seen trying to cut its way through heavy traffic at Exit 603, Subang Jaya.

This effectively caused an incoming motorcycle from behind the MPV to hit the vehicle, hard, throwing the rider to the ground.

Seconds later, another motorcycle, failing to stop in time, crashed into the fallen rider, running him over in the process before also being flung to the ground.

Netizens appeared to be in a heated debate to determine the party responsible for the accident.

One side of the aisle accused the MPV of clearly disobeying the law by reckless driving and trying to squeeze through traffic after having missed an exit.

I wondering….. When they drive always should know where they suppose to change lane before reach…. But Malaysia mostly drive fast lane coz wanna go fast…. Then suddenly changing lane at blind spot…. Bikers should be caution especially around exit lane

Typical Selfish malaysian driver… PEOPLE!! If u missed the junction/exit just use the next possible exit.. Waze/google map is genius enough to reroute your journey.. #period

While the other end of the argument claimed that it was the motorcycle who was at fault for riding trying to pass cars on the left side of traffic as well as for riding on the emergency lane and not using the available motorcycle lane.

Well, TRP took the time to contact a source familiar with Malaysian traffic laws to clear out the matter.

According to our anonymous source, the liability and fault of the accident fall on the driver of the MPV.

Apparently, the driver had dangerously tried to exit the highway even though he or she had gone way past it.

The source said that for their actions, the driver can be charged under Rule 7(1) LN166/59 of the Road Traffic Rules 1959 for failing to stay on the left side of the road while making a left turn.

He explained that from his point of view, the motorcycle riders were not at fault as the collision had occurred right at the exit of the expressway.

The source suggested that during the incident, the road appeared to be packed with traffic, and during traffic jams, motorcycles are allowed to utilize the far left lane or the emergency lane.

The source said that had the roads been clear at the time, and there were no traffic jams during the collision, the riders may be charged under Rule 9 and 53 LN166/59 of the Road Traffic Rules 1959 for riding on the “double lane” and on the emergency lane.