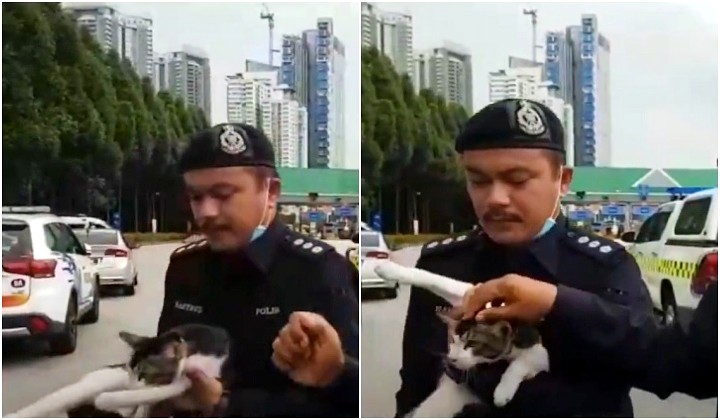 While many made attempts to balik kampung across state lines during the Raya weekend, an unlikely fugitive was caught at a police roadblock on 24th May, Sunday.

A car was stopped at a roadblock at Jalan Duta Tol after officers heard the sound of meowing emanating from the engine compartment – it turned out that a cat was stuck inside.

The driver of the vehicle took to Twitter to express his shock of finding out there was a cat stuck in his car after being pulled over at the roadblock.

Tales from Raya morning.. The police stopped me. I thought I had done something wrong, but turns out there’s a cat stuck in the bonnet of my car.

A spokesman for the Malaysian Civil Defense Force (APM) Kuala Lumpur told Harian Metro that they found the cat trapped in the front bumper of the car. After 30 minutes of fiddling with the front bumper and removing the accessory lining, the poor kitty was finally free.

A video of the police interview on the incident has also gone viral with Malaysians online highly amused by the jailbreak as well as the sight of the poor cat appearing on camera in the arms of an officer struggling to keep a hold of it.

Today, there has been an interstate travel attempt. Actually, it’s a cat trapped in a car driving through. Our officers are aware of the animal caught in the engine and so we helped save the cat. It appears to be someone’s pet as it has a collar.

The driver of the car, who was reportedly travelling from Keramat to Shah Alam, turned back to set the cat free at his home area as he believed it belonged to a neighbour.

The cat appears unharmed, though it’s attempt to break the Conditional Movement Control Order (CMCO) is a lesson to car owners to check their vehicles for runaway pets.