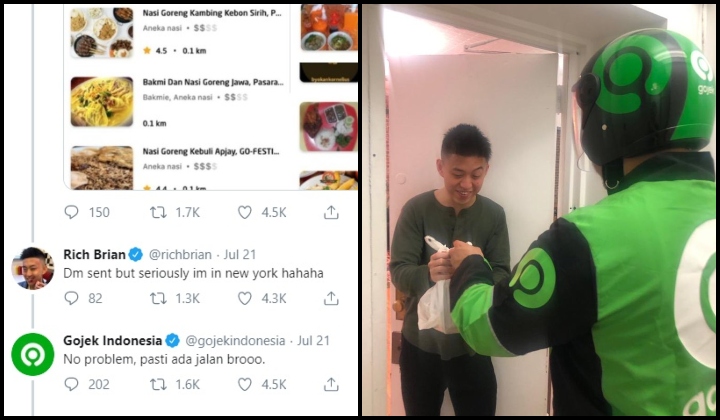 Anyone here ever feels annoyed when the abang
delivery takes FOREVER to arrive with your precious dinner? Or worse, when they
CANCEL ORDER AFTER YOUâ€™VE BEEN WAITING FOR SO LONG.

Yes, itâ€™s painful. But thatâ€™s not always the case as we
witnessed what can only be described as a miracle when Go-Jek delivered piping
hot Indonesian food to rapper Rich Brian all the way in New York City.

If youâ€™re wondering why Rich Brian sounds so familiar, the millennials might recognise him as the skinny Chinese Indonesian dude who vent viral in 2016 for rapping like a BOSS in Dat $tick.

The entire episode began when the Indonesian rapper tweeted about missing Indonesian food after he left his home nation to the bright lights of the Big Apple.

To his (and everyone elseâ€™s) surprise, Go-Jek replied WITH a menu and asked him to choose anything he wanted.

DM us your address, and let us know what you miss eating. pic.twitter.com/4e28bzOHLj

When an uncertain Rich Brian stated that heâ€™s currently in
New York, Go-Jek hit him with a â€œpasti ada jalan broooo.â€ (thereâ€™s surely
a way, broooo.)

That seemed to be the end of it, and the internet moved on
to troll on other topics.

88rising, Brianâ€™s record label, tweeted a picture of a Go-Jek driver handing over the food to Brian itself with the caption â€œYâ€™all really flew all the way out here.â€

yall really flew all the way out here 🤯🤯🤯 pic.twitter.com/l74nnlYvx1

With over 18,000 retweets, itâ€™s safe to say that the internet
was SUPREMELY impressed.

Hi @NASA. When you guys finally get men landed on moon for another time, just rest assured everytime they miss earth-bound foods, there is only one thing you can rely on to deliver.

And now I believe that this pic is not a lie. pic.twitter.com/9OWPudt01n

Translation: On the airplane
“Are you going to NY for holiday?”
“I’m delivering gofood hehe”

FYI, Go-Jek is basically the Grab of Indonesia lah. They started off as a motorbike taxi service app and soon progressed to deliveries and e-wallet.

Theyâ€™re extremely popular in Indonesia and are currently operating in Vietnam, Thailand and Singapore as well. Go-Jek might be entering Malaysia soon but thereâ€™s no concrete plans yet.

Here’s hoping that the food delivery services in Malaysia will reach this extreme level of winning!