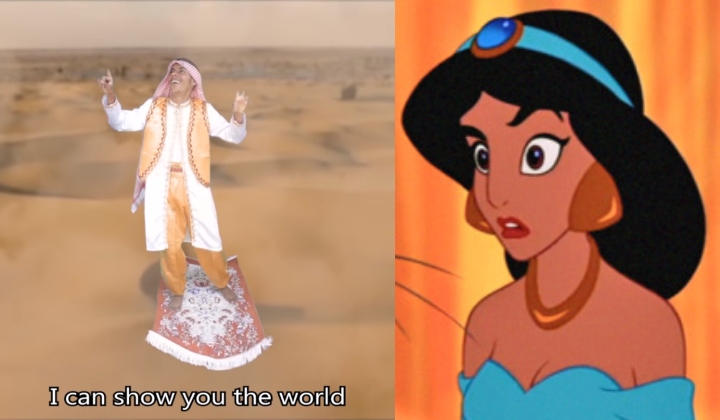 Disneyâ€™s live-action version of Aladdin was released in Malaysian theaters in late May 2019, and similar to itâ€™s animated 1992 version, was not safe from criticism on the country and culture it apparently represents.

According to some reports, the fictional city of Agrabah is based off of Baghdad, Iraq and the Middle East influences in the film are obvious.

For starters, there’s Aladdin’s opening song titled â€œArabian Nightsâ€. On top of that, when the narrator opens the film, he says, â€œWelcome to Agrabah, city mystery, of enchantment, and the finest merchandise this side of the River Jordan.â€

Yet, the characters in the film sound American. Was it just us or did you guys also think “live-action” meant that the film would resemble real life more closely?

Well, if you were in any way dissatisfied with how white-washed Aladdin was, this Indonesian YouTuber is here to give you an alternative, more â€œarabicâ€, version of just the films most famous song, “A Whole New World”.

And itâ€™s all you need, really.

3way Asiska opted out the films original instrumental for more â€œArabicâ€ sounding music and changed the pronunciation of ALL the lyrics to something we figure he THINKS Arabs sound like.

Although we donâ€™t agree that this is any more culturally accurate than the original version from the film, it definitely is a lot more entertaining.

The comment section for the video though, is a gold mine.

Welp, we can hardly remember how the original goes now.