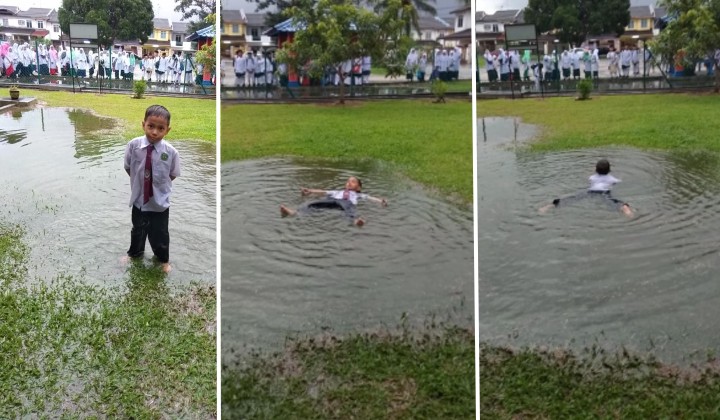 In the post, Rozita showed her son, clad in a primary school uniform and completely drenched.

â€œ…A teacher told me.. â€œIta your son is playing with water!!â€ I thought only a bit… Turned out, heâ€™s swimmingâ€¦â€

Internet users are chuckling at this little boyâ€™s actions and saying that he reminds them of what the 80â€™s and 90â€™s were all about, before gadgets.

Generally Facebook users are having a field day laughing at this little boy and finding him very amusing.

So much so that some have wanted to give him duit raya.

His intelligence has also been praised by some.

Maybe the amusement stems from their jealousy not being able to wade into a tiny ‘pool’ like that.

Facebook is also applauding the sporting mom that understands her child’s psychology and growth by allowing a child to have their fair share of play time and outdoor play.

That’s something many children now are lacking

He sure looks like he’s having fun, especially with an audience.

Maybe he IS training for a swimming tournament.