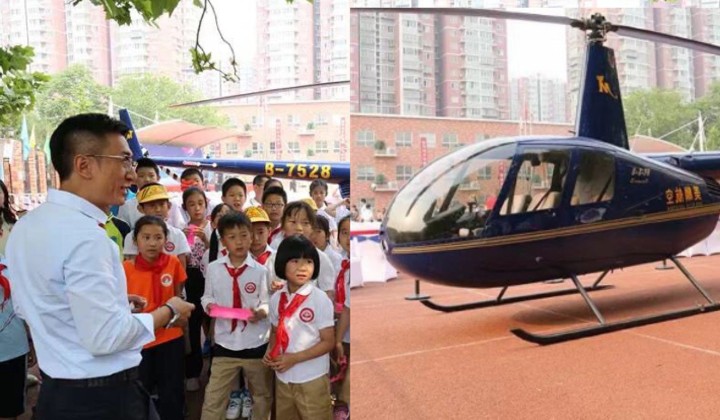 Late last year, people in eastern China ostracized a father who refused to send his son to school in anything other than a Ferrari.

But when a father in Beijing sent his first-grade daughter to school in a helicopter, he received mixed reactions on Chinese social media.

Chen, the father of the student happens to be a helicopter tycoon, providing helicopter tours in China’s capital.

He claims he sent his daughter to school in a helicopter purely for academic purposes.

Chen brought the helicopter to school as an opportunity for other students to see a helicopter up close.

He also hopes to spark the students’ interest in aviation.

Additionally, he added, he was officially invited by the school to fly the helicopter as part of the schoolâ€™s science and technology fair.

According to the South China Morning Post, a parent in Fengdan primary school was very happy with the initiative.

Meanwhile, Ecns.cn reports that there were some netizens who felt bringing the helicopter to school was an act of showing off.

Some netizens even doubted if the father even had a permit to land the helicopter on school grounds.

Either way, if you want to watch the full video, you can click here.

Source via:
1. Ecns.cn, May 14, 2019 (Dad sends helicopter to child’s school for science assignment)
2. South China Morning Post, May 13, 2019 (Chinese father decides to drop in on daughterâ€™s school â€¦ via helicopter)