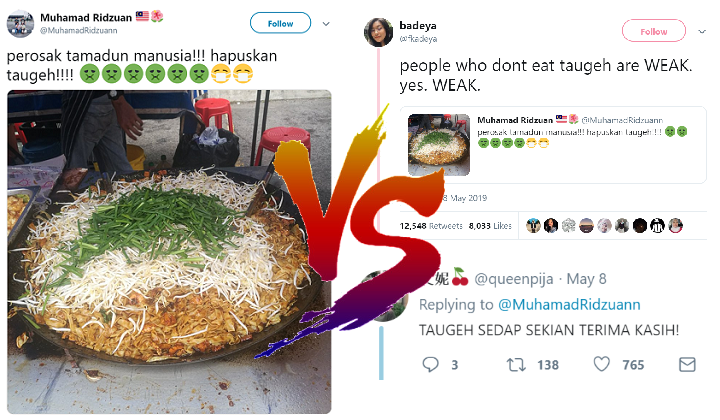 Twitterjaya has exploded over the past few days over beansprouts, also known as tauge or taugeh in Bahasa Malaysia.

Thousands have weighed in on the issue after twitter user @MuhamadRidzuann posted a picture of kuey teow goreng with a controversial caption.

Roughly translated, he said beansprouts were destroyers of human civilization and called for them to be eradicated followed by a couple of ‘sick’ emojis.

His post received over 3,000 likes and 4,600 retweets but while some people agreed that they were disgusting, those people were clearly a minority.

Many of those who replied or retweeted him were either fans of tauge or chastised him for being disrespectful of food.

After just a few hours, it was clear that Twitterjaya’s support for tauge was overwhelming and the minority who are against tauge clearly face future persecution.

But overall, we think the people really took issue with the language used to describe beansprouts or any type of food, and we believe it was really all in good fun.