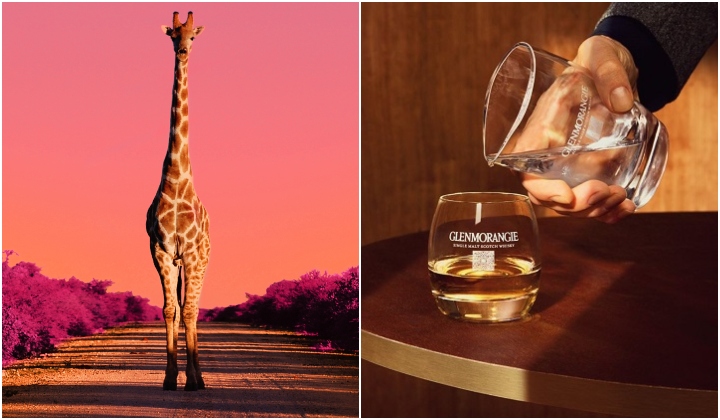 Giraffes and whisky are probably the furthest things apart from each other. One is known for prowling the dry African savannah while the other comes from the cool Scottish highlands.

But these two seemingly opposites come together at Glenmorangie to create powerful award-winning whiskys.

Nestled in the Scottish Highlands, the Glenmorangie Distillery houses the tallest malt whisky stills in Scotland at 5.24 metres.

These are no ordinary stills, either. Unlike most whisky distilleries, Glenmorangie’s stills were based on the design of gin still in 1887. Interestingly enough, these long necks are the same height as an adult male giraffe.

Much like how the giraffe’s neck gives it an advantage over competition, Glenmorangie’s long copper stills allow for the lightest and purest vapours to rise to the top to create a wonderfully fragrant and complex spirit bursting with fruity and floral notes.

Head of Maturing Whisky Stocks at Glenmorangie Brendan McCarron explains that these high stills are absolutely essential in removing any unpleasant flavours and fragrances.

Glenmorangie uses mineral water to make our single-malts. So in the distillation process, the taller stills actually takes away the oily, salty, sulphury flavours of the water.

The result is an elixir rightly known as the “water of life” or uisce beatha in Gaelic. In Glenmorangie’s case, the results are also award-winning single malts that won a total of 27 gold classed awards or above in prestigious industry competitions – all in 2019 alone.

Most notable of their spirited victors are Glenmorangie’s Original, Lasanta and Quinta Ruban labels.

The scotchmaker’s calling card, The Original, is renowned for being one of the smoothest and most delicate brews out there. Aged in American white oak casks for 10 years, the single malt is bursting with vanilla, citrus and floral fruity notes that gives it a highly pleasant sweetness. Meanwhile, the Lasanta kicks things up a notch – a warmer flavour with a richer amalgamation of spiced orange to sherry flavoured sultanas and caramel toffee flavours.

The Original and Lasanta both placed second for the Best Single Malt Scotch in the 2018 International Whisky Competition.

Finally, the Quinta Ruban is probably the darkest, most mature of Glenmorangie’s elixirs. Aged for 10 years in American white oak casks and finished ruby port pipes from the Quintas wine estates of Portugal, the amber single malt teases with walnut and dark mint chocolate notes.

No matter which of Glenmoragie’s scotch you toast to, remember to drink responsibly!

For The First Time Ever, A Malaysian Whisky Has Won At The World Spirits Competition

Why Whisky Is The Best CNY Drink For Maximum Huat

Whisky & Cheese. Why Weâ€™re In Love With This Strange Combo