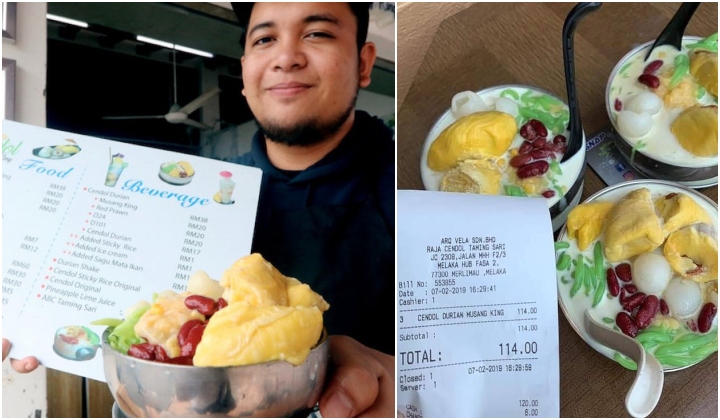 Several months ago, a post of someone complaining about being billed RM114 for three bowls of Musang King durian cendol went viral on Facebook.

However, instead of criticising the stall and its owner, netizens stood up for the cendol stall saying those prices were reasonable considering the market price for the premium fruit.

“Am I the only one who feels like these prices are cheap? It’s Musang King ok, not the durian behind your house that’s been thrown into that bowl of cendol.”

“This is considered cheap la. I’d buy five bowls if I was there. Come all lets go there for some cendol? I can’t wait to eat some myself!”

“The durian is of Musang King type. Of course it’s going to be expensive. I’d just order cendol with a little bit of durian ice cream. That would cost at most RM8 per bowl. And it’s still satisfying!”

Owner of the stall, Muhammad Ariff Qayyum Mohd Zamri, 25, said that since the post went viral, his sales soared even further.

â€œIâ€™m so thankful the matter went viral. Now more people know about my stall and Iâ€™ve many more customers. My workers and I have never been busier.â€

Instead of being salty for the bad publicity, he thanked the netizen instead, clarifying that his stall, Raja Cendol Taming Sari, clearly advertises itâ€™s prices both inside and outside its premises.

After the issue was widely shared online, Melakaâ€™s division of the Ministry of Domestic Trade and Consumer Affairs also agreed with Muhammad Ariff.

â€œTo me, there is no issue. Even the trader in question has stated the price for each cendol and it is up to customers to choose the cendol that they can afford.â€

Division director Jaiya Abu explained that his office received a complaint over the RM114 price, however, when officials were sent to investigate the store, they found that the stall did not break any rules.

Prior to the fuss, Raja Cendol Taming Sari generated an average monthly income of RM90,000 that would swell to RM150,000 a month during the school holidays. (Walao, we also want to sell durian cendol la liddis.)

Are we the only ones with major durian cendol cravings now?

PENJANA: Govt Relaunches HOC Along With Other Initiatives To Help Home Ownership