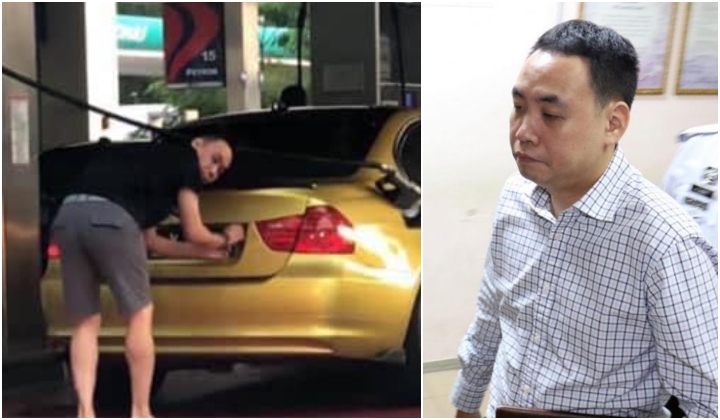 In May this year, a driver of a Singapore-registered BMW was filmed switching the number plate of his gold sedan at a petrol station in Malaysia.

Photos of him making the switch were posted on a Facebook page called SG Road Vigilante – SGRV.

Based on the Facebook post, the BMW bearing number plate SLX27E was switched to SKD2777C. Checks on MyEG (which we assume were done by investigative netizens) showed that the latter plate belonged to another Singaporean-registered car, a Hyundai Elantra.

About an hour after the incident, the car was then caught speeding on a Malaysian highway, but the RM150 summons was issued to the SKD2777C registration plate instead.

Law-championing netizens (a.k.a snitches) caused the post to go viral on social media which eventually led to the man surrendering himself to JPJ.

Tan Hock Lai, 44, pleaded guilty after being charged under Section 108(3)(f) of the Road Transport Act 1987 for his offense which, according to the charge sheet, was committed at a petrol station near the Second Link in Gelang Patah around 7.35am on May 18.

Based on this Section, Tan faces a fine of up to RM20,000 or up to five years jail. After pleading guilty, Tan was fined RM8,000, a fine he has since paid.

Displaying a forged number plate is also an offence in Singapore, one that can see those found guilty be fined up to SGD5,000, or face a jail term of up to a year, or both