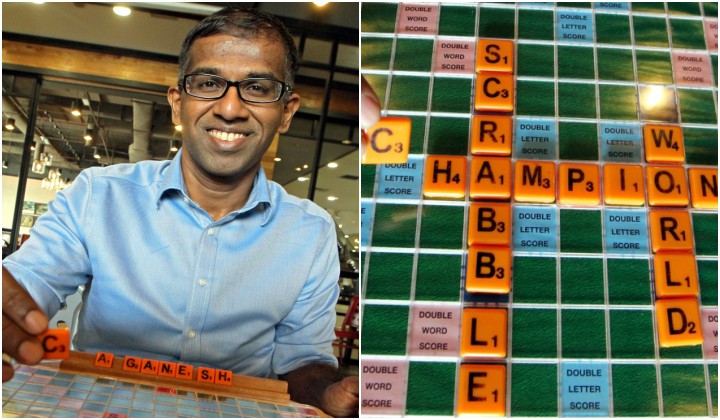 Ganesh Asirvatham, 40, is currently the worldâ€™s No.1 Scrabble player.

Ganesh began his Scrabble career at the tender age of 11 years old, and then retired in 2008 when he was 29. Almost a decade later, purely to feed his curiosity, Ganesh got back in the game and secured his ranking as world No.1.

“I wanted to see if I still had what it took to compete with the best and, to that end, I put in a lot of work to get back to my best. It helped that I really hadnâ€™t forgotten the words that I had learnt almost a decade ago, so the effort wasnâ€™t as onerous as I had expected.”

In 2017, he took part in a tournament in Penang where 30 of the worldâ€™s top players competed.

“I managed to be the overall champion and this secured my ranking as world No.1.”

Growing up in a middle income family in the 1980â€™s, Ganesh had little else to fill his time with other than Scrabble and Monopoly. When he was 11 years old, he finished in third place at his first Scrabble competition, the YMCA youth championship.

After he was introduced to the competitive Scrabble scene, there was no turning back, the young boy was hooked on this word game.

During his teen years, Ganesh was the top junior player in the country, frequently representing Malaysia in international Scrabble competitions.

By an amazingly fortunate twist of fate when he was 16 years old, Ganeshâ€™s family moved close to the home of the then Malaysian national Scrabble champion Raja Fuadin Abdullah, who decided to take Ganesh under his wing and become his mentor.

“In 2005, I managed to break into the top 10 at the World Champs in London. And in 2007, I made it into the final of World Champs in Mumbai. That was the peak of my Scrabble-playing career as I also managed to get a Guinness World Record for most number of opponents played simultaneously.”

Funded by the Malaysian Scrabble Association on Nov 7, 2007 in Mumbai India, Ganesh played against 25 people at the same time. He won 21 out of those 25 games.

Then in 2008, he decided to retire to focus on other things in life.

Ganesh, who hails from Klang, Selangor, graduated in 2003 with a degree in Linguistics from Universiti Putra Malaysia in Serdang. He was an English language lecturer for 10 years.

In 2009, he taught English in Somalia and did his Masters in Linguistics before moving to the corporate sector.  He now works as a senior manager of learning and development for Standard Chartered Global Business Services in Bukit Jalil, Kuala Lumpur.

Even after leaving Scrabble for almost a decade, his love for Scrabble has never waned. And now, Ganesh is back at the top.

If anything, Ganeshâ€™s experience goes to show that itâ€™s never too late to pursue something you love.

This October, Ganesh will be representing Malaysia in the World English Language Scrabble Players Association in Goa, India. He will go head-to-head with Nigel Richards, the worldâ€™s No.2 Scrabble player.