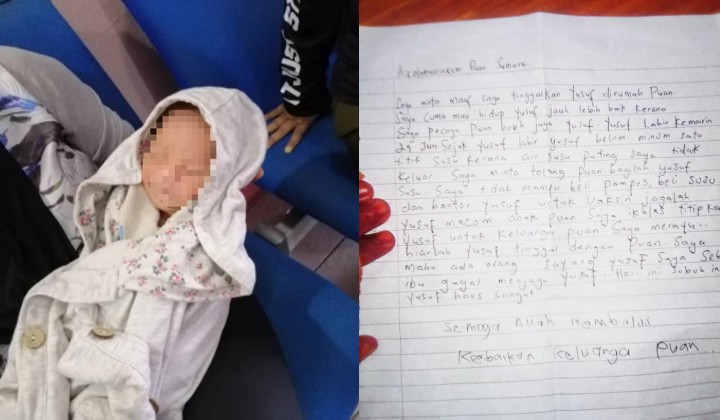 Netizens are melancholy over a baby which was left abandoned on a doorstep of a home in Kota Kinabalu, Sabah on Sunday.

The new-born baby boy was found by the owner of the home during the wee hours of the morning together with what appeared to be a handwritten letter from the childâ€™s mother.

The heartfelt note, which was addressed to the homeowner identified only as Puan Sumarti, revealed how the unknown mother had come to the decision to leave her child in the care of a stranger.

â€œIâ€™m sorry for leaving (the baby) at your doorstep. I just want the best for (the baby) because I believe you are the best choice to care for him.â€

According to the letter, the women felt that she was
undeserving of the child as she was unable to provide him.

â€œI can’t afford to buy diapers, milk, or send him to get vaccinated. Please take care of him as you would your ownâ€¦ I beg youâ€¦â€

This heart-rending story which was shared by Facebook users Irranun Peace had since gone viral, receiving more than 2,000 shares.

Commenters can be seen showing empathy towards the unidentified mother and giving props for her brave actions in giving-up her child in a humane manner.

“So sad. I hope the mother is okay during such a trying time. Grateful that she didn’t dump the baby. May (the baby) grow up well. I hope the family that takes care of would do so with ease and blessings.”

“It’s wasn’t an easy decision for the mother. Poor (baby). Surely God has a better plan.”

“It’s a good thing (the mother) gave (the baby) to someone. Better than dumping the child (to be left for dead) just like that. There might be a reason why the mother chose to give him away. Maybe she was truly desperate.”

Malaysian’s are all too familiar with disheartening reports of baby dumping cases that have been plaguing the country.

According to the Women, Family and Community Development Ministry, there have been more than 500 baby dumping cases reported between 2014 to 2018 with over 1,000 incidents happening over the past 10 years.

We are glad to report that the baby boy was stable and healthy and is currently under the care of local welfare authorities.