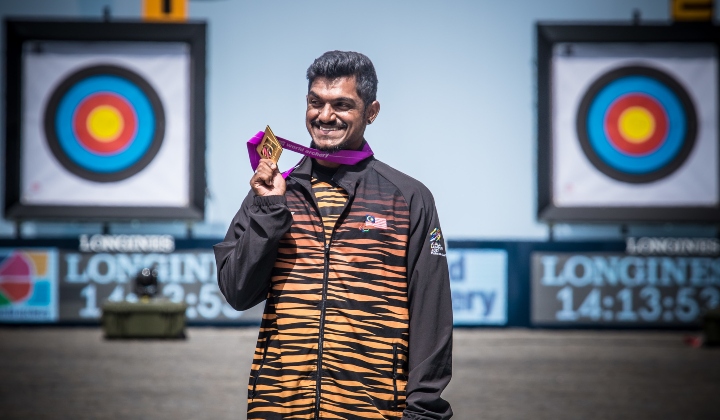 Kedah-born Suresh Selvathamby has made us extremely proud by becoming Malaysiaâ€™s first ever world champion in para archery!

World Archery reported that the 25-year-old arrived in â€˜s-Hertogenbosch, Netherlands, for the World Archery Para Championships as world number 35, and left the city as world champion after defeating United Stateâ€™s Eric Bennet in the recurve menâ€™s team gold medal match.

â€œIâ€™m so happy. I donâ€™t know what to say. Iâ€™m speechless. These are my first championships and I got champion,â€

Eric Bennet, who won the world championship in 2015, opened the match against Suresh strong and built a 3-1 lead.

â€œIt wasnâ€™t difficult. For me it was easy. I just did my best,â€

Suresh, commenting on the match.

Sureshâ€™s achievement is a first in a major para archery event after Hasihin Nawawi won silver at 2012 London Paralympic Games.

Prior to that, Malaysiaâ€™s best achievement in World Archery Para Championships was by Salam Sidik, who won the bronze medal in Turin in 2011.

Suresh will also be representing Malaysia at next years Paralympic Games in Tokyo, Japan after he qualified for the Games on Saturday by reaching the top 16 in s-Hertogenbosch.

Congratulations, Suresh! Youâ€™ve made us so very proud and weâ€™re 100% behind you every step of the way!

Did Malaysia Win Best National Costume At Miss Universe 2019 Or Not?