The stray dog yelped when it was shot and was found dead with the arrow sticking out of its face. 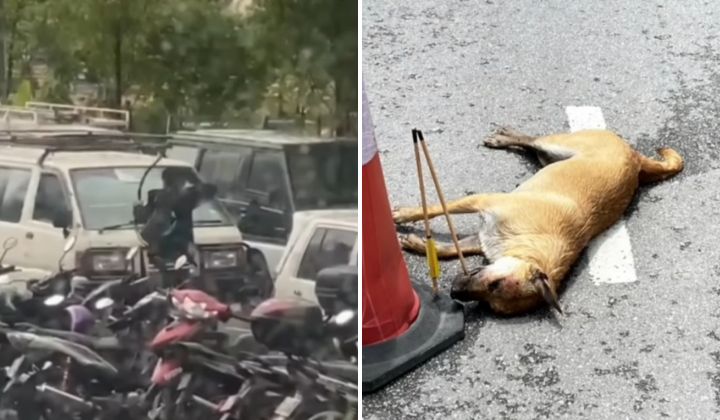 Persatuan Haiwan Terbiar (SAFM) posted a video on Instagram showing a man hunting and killing a stray dog with a bow and arrow in broad daylight.

The man followed the stray dog that was hiding around parked vehicles and shot the dog in its face.

The stray dog could be heard yelping in the video when the arrow struck its face.

The animal rights activist group said the poor dog was found dead with the arrow still pierced through its face.

SAFM said it doesn’t believe the dog posed any danger to the suspect and pointed out the suspect’s cruelty.

Why would this cruel person prey on dogs as part of his archery training?

What’s upsetting is that it’s not the first time the group had reported that an animal had been cruelly killed by an inhumane archer.

Anyone with information on the perpetrator is encouraged to come forward. They can Whatsapp SAFM’s Hotline at 0162662007 or get in touch via their website.

Those who want to practice their archery skills are advised to do so in an appropriate place.

There are better ways to manage stray dog populations

She added that it’s understandable that some people aren’t comfortable with stray dogs in their area, but that doesn’t mean they should commit such inhumane acts.

There are other better ways to manage the stray dog populations such as the ‘trap, neuter and release’ programmes in some communities.

Catherine further explained that community dogs are assets because they can keep the population of vermins such as rats under control in neighbourhoods.

In some cases, she said the dogs have been known to protect residents from burglars and attacks.

She said the suspect who killed the dog must be found and prosecuted under the law.

Studies have shown that such vicious behaviour towards animals can indicate psychopathic tendencies, and the person will go on to commit horrendous acts against humans.

What to do if you come across a stray animal?

When you come across a stray animal that’s not behaving aggressively, the first thing to remember is not to be afraid.

Often, stray animals will try to avoid getting in your way but you can still give them a bit of food.

READ MORE: This Kakak Educates People On How To Handle Stray Dogs No Matter What Their Belief

If you found an injured stray animal and intend to rescue it, here are some tips on what to do.

READ MORE: Rescued A Cat/Dog In Malaysia? Here’s What To Do When You Save A Stray Animal

What Exactly Is Feline Parvovirus?

Don’t Buy These Colourful Axolotls, The Chemicals Used Will Kill Them In A Week