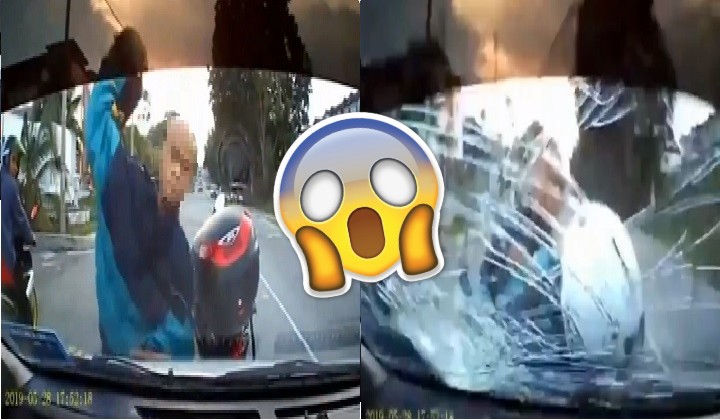 [UPDATE] The suspect has been identified as a warehouse assistant in his 30s and arrested earlier today around 3pm. Investigations are still underway as reported by Sinar Harian.

A motorcyclist flew into a rage when he got honked by a car and smashed the windscreen with his helmet.

In a dash cam video circulating around social media, two motorcyclists were riding and talking leisurely, but the car overtook the motorcycles and honked, things got wild.

One of the bike riders stopped in front of the car whipped his helmet at the windscreen, causing a HUGE crack.

Watch the shocking altercation in the video below:

A second video shows the vehicles pulling over to the side of the road where the driver and the angry motorcyclist talked out of view of the camera.

The viral video garnered plenty of reactions with many calling for the man’s immediate arrest.

Berita Harian reported that the incident which took place in Taman Bukit Serdang, near Seri Kembangan, is currently under investigation by the police.

The victim in the car is a 22 year old woman while the infuriated man has already been identified by the police who are currently tracking him down.

We hope that the perpetrator is caught and brought to justice soon. Meanwhile, let’s be kinder to each other on the roads, yeah. We’re better than this, Malaysia!