Justice is finally served after three years for the victim who lost a leg due to the pothole. 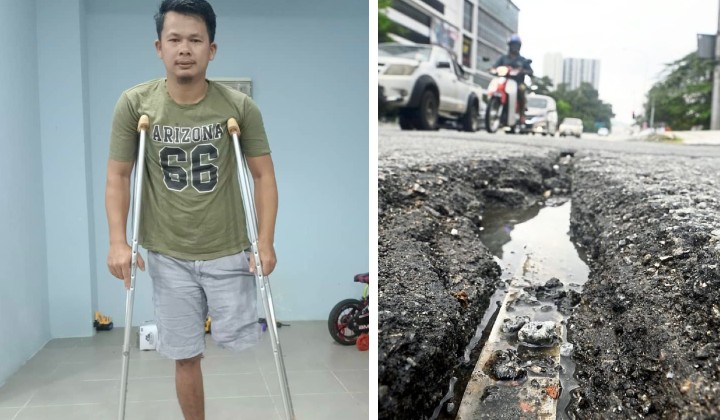 A pothole victim received RM652,000 in compensation for an accident which caused him to lose his left leg.

The Kota Bharu Sessions Court ruled that he be paid the amount for the accident, which happened almost three years ago.

Malaysiakini quoted his lawyer, Wahab Che Kob and Nor Asniza Husin, saying the compensation was justified following a claim against Roadcare Malaysia Sdn Bhd and the Malaysian government.

According to them, at the beginning of the trial, Roadcare denied and refuted the existence of potholes on the road in question.

Roadcare is a road maintenance contractor for the Malaysian government.

However, the court stated based on the evidence and the plaintiff’s testimony that the accident occurred due to the overflowing hole caused by the negligence of Roadcare.

The decision was made by judge Mohd Zul Zakiqudin Zulkifli, while the defendant was represented by lawyers S Siva Shanker and Asmah Che Wan.

The federal and local governments spend millions on road repair every year.

Yet every time heavy rainfall lashes the city, potholes emerge in most parts of the country.

With incessant rains hitting the country all year round, especially during the monsoon period, potholes have emerged on various roads across the country.

The administration has blamed road digging work as the reason for potholes.

But Malaysians believe that inferior road materials and lack of coordination between various departments are some of the reasons for frequent potholes on roads.

The problem has endured forever, and road repairs only seem to happen in earnest near the election.

More often than not, the public had to take it upon themselves to fix the potholes.