Sabahans have urged the state government to speed up repairs of damaged roads. 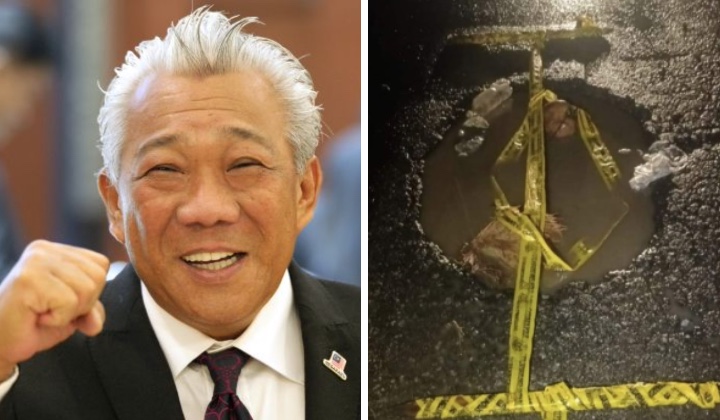 Bung was commenting on public complaints about the pothole-strewn 6.4km stretch of road connecting Sandakan and Telupid.

The public had taken to social media to voice their grievances, as the road condition is among the causes of road accidents in the area.

The road is so bad that they compared it to the moon’s surface.

The public was further enraged after the deputy chief minister said in March that the road will not be repaired.

The reason given was that the Pan Borneo Highway project will be completed in two years.

Sabahan road users were not amused and demanded that the road tax be waived until the new highway is finished.

They pointed out that vehicle repairs exacerbated by poor road conditions have added to their financial burden and Sabah already ranks as Malaysia’s poorest state.

In May, the Sabah government said it had applied for RM265 million from the federal government to repair damaged roads in the state.

Bung Moktar, also the State Works Minister, said the state government sympathized with the people’s grievances, especially road users who were affected by the construction of the Pan Borneo Highway on the east coast of Sabah.

Despite the announcement by the Sabah Umno leader, the public remain sceptical and for good reason.

The Sandakan Airport, which was upgraded at the end of last year, will be a catalyst to drive development in the district, especially in the ecotourism sector.

The RM80.9 million project was approved in 2017. Construction began in 2019, among others, involving the extension of the existing track from 2.133 kilometres to 2.5 kilometres.

Wee said the focus is on increasing tourists to Sandakan and the Malaysian Aviation Commission will help to ensure that any flight to Sabah via Sandakan Airport be given priority.

The progress at Sandakan Airport had been met with cautious optimism by the public.

Does that include the rat I saw in the men’s toilets last week (at Sandakan Airport) @weekasiongmp?

But having said that, condition of the Sandakan Airport is much much better than KKIA. As the “door” to Sabah, KKIA is a disgrace. @sabahtourism @MY_Airports 1/2 https://t.co/MQlPg46kua