The shop owner was alert enough to check for proof of transaction on the app after the alleged transactions took place. 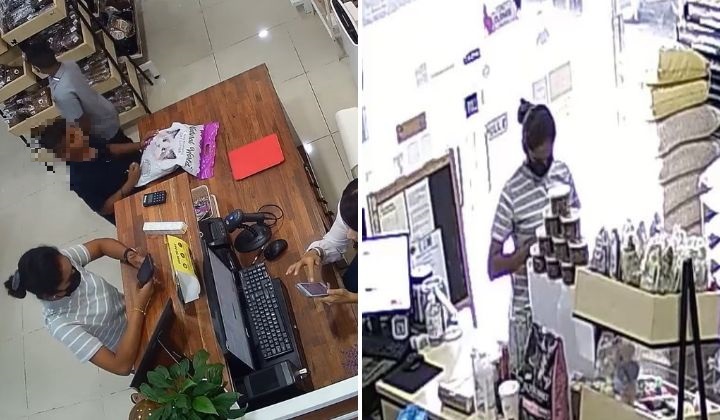 Cashless payment methods such as paying using QR pay are supposed to be secure and convenient, especially during pandemic times. Sadly, most good things will be exploited by opportunists.

Recently, a shop owner Faez (@FaezNajmuddin) shared his experience with a customer who tried to cheat him. The woman walked in with her two young boys and got a few things from the shop.

First, she tried to pay with DuitNow, but when Faez checked for proof of transaction on the QRPayBiz app, there was nothing.

This lady *almost* got away with it at our shop tadi. Sumpah, poker face gila.

Her first purchase totalled more than RM40, but the woman continued to browse and add more things to buy. Faez decided to step up to the counter when the second round of transactions began.

This time, she showed her phone screen to confirm her payment. She then coolly took all of the items and got into the car.

I stepped infront to the cashier. Dia memang strike a convo lah, tanya macam macam while we were scanning her items. Then, she showed her phone screen to confirm. This is what she showed me: pic.twitter.com/2Izj9KxqGw

However, Faez checked again in the app and saw no transaction so he quickly stopped her and asked her to return all the items.

She claimed that her money has been deducted. Faez insisted that she return all the items and take the issue up with Maybank, so she left empty-handed.

Not long after that, she had the nerve to ask Faez when her money will be returned. Faez contacted Maybank’s Fraud Department and they advised him to ignore her and tell her to call them instead.

She had the nerve to text tanya bila nak bank in balik duit dia. I called Maybank’s Fraud Dept and they told me to not layan and ask her to call them. pic.twitter.com/pHal6HpQ4Z

The woman tried again to trick Faez’s other shop with the same method. Luckily, the staff in that shop was already pre-warned, so they waited for the transaction to go through before letting her leave.

She finally paid by cash.

How the fraud works

Based on the CCTV video, the woman was spotted taking a screenshot of the Pay page and then closing her Maybank app before showing the phone to the cashier.

She also cropped out the “Pay Now” button on the screenshot of the page, and instead of the page indicating a “Successful” payment, she put in the company’s name.

This footage nampak she keyed in the amount, screenshot the Pay page, then tutup the Maybank app. Lol. pic.twitter.com/0eCxArQpAs

Spend Some Raya Spirit On A Syawal Shopping Spree! Here’s Our List Of MUST-GRAB Brands

Shop For Groceries The Easy Way With These 4 Smart Solutions