Our first look at the Samsung Galaxy A52s 5G. 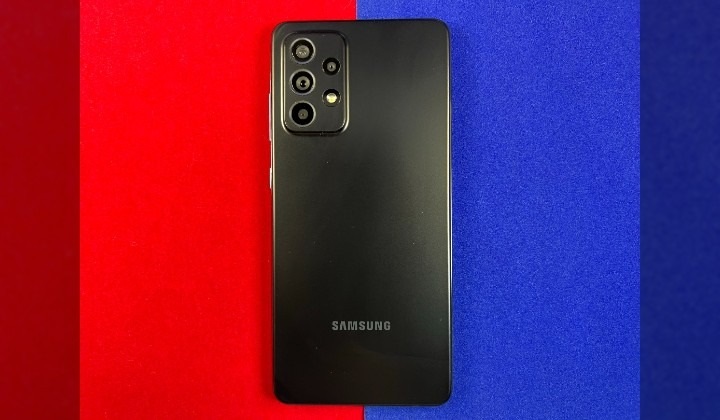 With flagship phones flaunting a phone maker’s best and latest features, it is tough to get excited about a mid-range phone like the Samsung Galaxy A52s 5G.

But right out of the box, this sub RM2,000 Android smartphone impresses with features that even the latest and the greatest don’t have.

An Adapter & An Audio Jack

Yes, the A52s 5G comes with an adapter, a quality of life addition that is the envy of any new Galaxy Z Fold3 or Flip3 owner.

It also has a 3.5mm audio Jack — how novel! — but there are no wired earbuds included, which is a shame.

If you look past the accessories you can see that the phone is huge!

The large screen has a film on it that makes it feel like it already has a screen protector.

In hand, the display is so large, I can’t get my thumb across it and I am used to large phones. This is a two-handed device and can be cumbersome for smaller hands.

Flipping the phone around and tapping a fingernail on the back creates a distinct sound which reveals that part of the phone is plastic. It being not cool to the touch double confirms it.

The finish is excellent. It looks like anodized aluminium. But it is plastic, and it doesn’t come off. I tried.

In the top right corner at the back of the A52s 5G is a very nicely molded camera bump with a cluster of cameras arranged like a traffic light with a pedestrian crossing light at the side: Four cameras and an LED flash.

The Z Fold3 has only three rear cameras.

I thought setting up the A52s 5G would be similar to the Z Flip3 which I reviewed previously — insert shameless plug — but there are some fundamental differences.

Although both phones go through the same paces — Google sign-in, Samsung account sign-in, set up security, and it takes a long time to get everything downloaded and updated — there are fewer optional apps to choose from.

That’s because all of it is made compulsory. Which is frustrating.

I am ok(ish) with the full Samsung, Google, and Microsoft suite of apps being preinstalled

However, I am not ok with Facebook, Spotify, Netflix, YouTube Music, Lazada, and LinkedIn taking up resources without asking on a brand new smartphone.

At least the Z Flip3 gives users more options to not install the app that they don’t want. Except for Facebook.

Still, I am excited to find out what the Samsung Galaxy A52s 5G is capable of. Expect to find a review on TRP real soon.

In the meantime, check out our first look at the Samsung Galaxy A52.

READ MORE: Our First Look At The AWESOME Blue Samsung Galaxy A52

BTW, TRP now has a tech site, so head on over to www.techtrp.com to see what we have there.