There are many types of fish paste or ‘fish cake’ found in Malaysia, they’re just called or prepared differently. 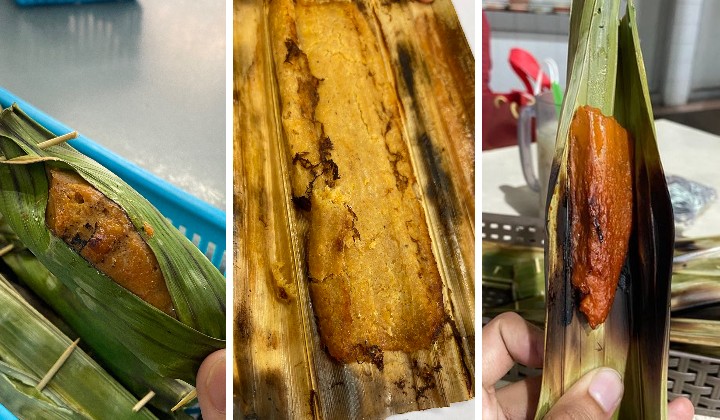 Have you ever gone to an outdoor food court, got a table and suddenly this random lady will slowly hand you a basket of those thin rectangular leaf parcels? Those are not free complimentary snacks, okay.

If you don’t know what that is, that’s called Otak-Otak or if you translate it directly, ‘brains’. They’re called that because of their appearance, color and texture, that’s similar to mashed brains (appetizing meaning, wouldn’t you say?).

However, what they actually are, are fish pastes or specifically fish flesh mixed with other ingredients and cooked in leaves. They may look unconvincing, but once you try them, you’ll never get enough!

There are actually many kinds of fish pastes that you can find in Southeast Asia. They come in different shapes and are called by different names. There are also plenty of those in Malaysia too.

Here are the types of fish paste that you can find in Malaysia:

Now, remember the ones that the lady slowly handed to you? Those are the Muar (Johor) style Otak-Otak. Different from other Otak-Otak in Indonesia and Penang, this one is red in colour because it has red chillies in it. They come in a thin flat rectangular shape.

The ingredients used to make these are fish flesh, coconut milk and a bunch of spices as well as herbs. When the paste or puree is ready, they’re placed into coconut leaves or banana leaves, folded and secured, then grilled on a charcoal fire. They can also be cooked in ovens or occasionally steamed. The grilled version has a drier taste than the others but it is exceptionally good.

The Peranakan style Otak- Otak in Penang is different from the Muar one. It has almost the same ingredients but its signature star component is the wild betel leaf (daun kaduk). This one comes in a thick triangular prism or box shape.

After the ingredients are pureed, they’re placed into banana leaves and steamed. Apart from fish, you can also find other seafood flavours for this kind of Otak-Otak like prawn, squid, and crab. This version of Otak-Otak is usually yellow or orange in colour and the texture is wet, succulent and super soft.

Satar is a version of fish paste too but they’re grey or brown in colour and come in a triangular pyramid shape. You can see this in Terengganu where they originate from.

Besides the fish, the star ingredient used for satar is grated coconut. After the fish is cooked and mixed with the other ingredients, it’s folded into a pyramid in a banana leaf and then poked on a bamboo stick. With three to five satar (depending on size) on one stick, they’re then grilled on a charcoal fire. The texture of satar is a bit more chewy (thanks to the grated coconut) and has a more prominent fish taste than the others.

This is also a version of Otak-Otak but is especially popular in Sarawak. With recipe originating from the Melanau ethnic, it is said that Pipus is popular among the locals in Daro, Mukah.

Pipus can be in various flavours like sardine, pirang, puffer, gonjeng and also squid. They are wrapped in special leaves called the Iseng leaves or Nipah leaves. Instead of grilling and steaming the dish, Pipus is slowly smoked until cooked so that the flavours of the paste will properly infuse with the fish.

Some of them look exactly like the Muar Otak-Otak but is said to taste more like the Terengganu Satar. Locals there are keener with the original flavours of the food, without extra additional seasoning, so if it’s a fish Pipus, you’ll get that authentic fish taste.

Pepes is another type of food similar to Otak-Otak which originated from Indonesia. It’s also available in Malaysia, though not as popular as Otak-Otak or Satar.

Here, they’re popular in Johor and processed like Otak-Otak; the fish is shredded and mixed with the paste. Chicken pepes is also quite popular here too. The shape varies in size but most of them are rectangular and they can be steamed or grilled too. They’re said to taste spicy and sweet at the same time.

In Indonesia, they’re not actual fish paste but they’re a chunk of fish (one whole fish or smaller parts of fish), marinated in a type of seasoned paste with herbs and wrapped in banana leaves.

Pepes can also be associated with Botok and Pais, another two dishes where the whole marinated fish with a few other ingredients are wrapped in banana leaves and cooked either by steaming or grilling.

Nowadays, you can have these ‘fish paste’ or Otak-Otak in different flavours like chicken and other seafood flavors. You can also get them frozen in little plastic packages or wrapped in popia skin (spring roll pastry). There are endless ways to enjoy these!

Do you think we’ve missed a few types of food similar to Otak-Otak? If you know of any other variations of these fish pastes found in Malaysia, do let us know! Which one of these have you tried?