From different types of nasi and noodles to various types of kuih and appetizers, we listed a lot of Malaysian food that you should try in each state. 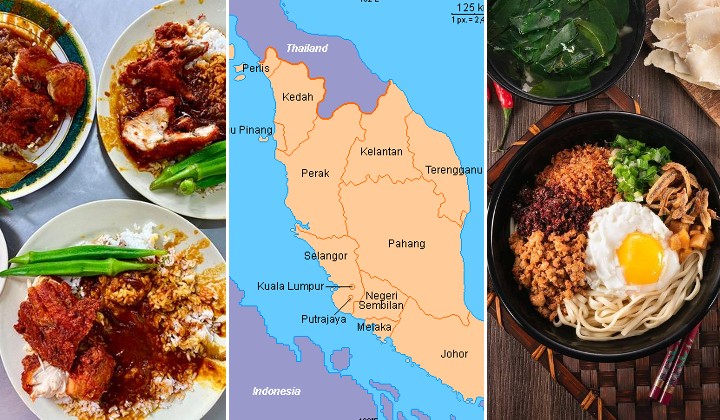 Malaysia. We are synonymous with mixed races, cultures and FOOD. Frankly speaking, you’re not Malaysian if you don’t like Malaysian food.

Malaysia is a cultural melting pot for various races such as Chinese, Indian, Malay, Bornean and more. With numerous food from different heritages, fusion cuisines are inevitable.

Here, we listed the most common and popular food that you can find in each Malaysian state. You might not even have heard of or recognize some of these dishes.

So if you’re heading to these particular states, make sure to drop by and give their famous food a try.

Because there’s so much to cover, we have to split the list into two. Here’s part one.

Starting from the very north, our beloved Perlis state. Perlis is known for its famous port called Kuala Perlis where they sell a variety of seafood there. Hence that is why Ikan Bakar is at the top of our list.

Ikan Bakar or grilled fish is any fish that is seasoned with a spice marinade and later grilled on a charcoal grill to give it an amazing smoky flavour. It can be wrapped with banana leaves to avoid the fish from sticking to the grill.

Other seafood delicacies like fried calamari, butter prawns, salted egg crabs, grilled horseshoe crabs, boiled cockles and more can be served together with the grilled fish. It’s a seafood paradise if you’re in Kuala Perlis.

Besides that, Perlis is also known for their fragrant and sweet mango called Harum Manis (because it’s so sought after, it’s often pricey too) and their glutinous rice with dried salted fish and grated coconut (usually served as a breakfast dish).

Kedah is known as the rice bowl of Malaysia as Kedah produces a large portion of Malaysia’s rice. Heck, they even got a paddy museum there. So here’s a rice meal that is widely popular in the northern region of Malaysia.

Nasi Daging or rice cooked with beef is a Malaysian version of Pilaf which means rice that is soaked/cooked with broth and added meat, spices and other ingredients.

In Kedah’s version of the rice (usually basmati), it is served with an Asam sauce or Air Asam that is prepared with onions, tomatoes, bird’s eye chili, asam water, lime and dried shrimp paste (belacan) or dried coconut paste (kerisik) to add flavour. The combination of sour, sweet and spicy flavour of the Asam sauce goes wonderfully well with the aromatic and meaty rice.

Other than that, this state is also known for their Laksa Kedah (thick rice noodles with minced and boiled fish soup) and Peknga (traditional breakfast coconut pancake).

If you wanna taste the best char kway teow in Malaysia, head on over to Penang.

Although ubiquitous in all Malaysia, what differentiates Penang’s char kway teow and others is the so-called wok hei (fresh from a frying wok) smoky charcoal flavour. Some Penang versions have lard (non-halal) in them for the original flavour while some do have the halal version of this dish.

To add to the list, Penang is also known for its Nasi Kandar (steamed rice with several Indian curries and side dishes) as well as Pasembur or Rojak Mamak (mixed dish of seafood fritters, vegetables, and special gravy).

Kai See Hor Fun or shredded chicken rice noodles is a flat rice noodle dish coupled with a flavoursome chicken broth soup boiled with prawn heads and shells that creates the orange hues of oil in the soup. It is served with tender shredded chicken, prawns and chopped chives on top.

In addition, Hainanese Chicken Rice and Nasi Ganja (a version of nasi kandar but it is so addictive to the point that people started calling it ganja [marijuana]) are also popular dishes in Ipoh.

Satay is a dish of seasoned meat poked by skewers (similar to a shish kebab) and grilled on a charcoal grill. It actually originated all the way from Java, Indonesia (called sate) and was spread out through neighbouring countries like Malaysia and Thailand.

For the case of Satay Kajang, a traveller named Wak Tasnim Bin Saiban from Java came to Kajang and began his business of selling soup, ‘ketupat‘ and sate. Eventually, a man named Haji Samuri married his grandaughter and continued the business with the name of “Satay Kajang Haji Samuri“. And the rest was history.

Served with a sweet peanut sauce, satay comes in many versions and flavours like marinated beef, chicken, lamb, pork [non-halal] and many more.

Bak Kut Teh (meat bone tea – meaty pork ribs simmered in a seasoned broth [non-halal]) and Sambal Taun (spicy greyish gravy made from cow’s skin) are also some of the well-known Selangor delicacies.

If you love spicy food, this is a dish to test your spiciness tolerance.

Invented in Kuala Lumpur, this dish transformed from the traditional Chinese pan mee / ban mian which is usually served with soup to a dry pan mee served with chillies and wonderful tasty sides.

For this dish, flat noodles are combined with tons of dried chilli, garlic, dried shrimp, seasonings and topped with meat, poached eggs and crispy anchovies. Usually the meat used is pork so it’s non halal but it could be replaced with other alternatives as well.

Masak Lemak Cili Api is a Malaysian curry that originates from the Minangkabau heritage that settled in Negeri Sembilan long ago.

Vibrant yellow in colour, this spicy and creamy curry is mainly a blend of bird’s eye chillies, coconut milk, turmeric and some other aromatic spices. It is usually served with plain rice, sambal, and ulam (raw vegetables).

Popularly cooked with smoked beef which has been marinated with spices and smoked slowly over a coal fire, the protein for this dish can also be chicken, eggs, seafood and more.

Other worthy Negeri Sembilan gems are the Siew Pao (flaky BBQ pork buns) and Chicken Curry Bun / Golden Pillow (chicken curry wrapped in paper/foil and wrapped again in a giant bun) which are both non-halal.

Although this dish has a lot of versions throughout the country, the Melaka Asam Pedas is said to be the best kind of Asam Pedas, or so they say.

Usually cooked with fish, the combination of tamarind juice and chili paste is what gives this dish it’s signature sour and spicy taste.

What differentiates Melaka’s Asam Pedas with others is the unique blend of spices which would be black pepper, candlenut, sweet cumin, cumin and kaffer lime (Kesum leaves and Kantan flower are surprisingly not used in the authentic Melaka recipe).

Additionally, Melaka is also known for its Satay Celup or Steamboat Satay (an assortment of raw and semicooked seafood/meat/vegetables poked on skewers and dunked into a boiling pot of satay gravy) and Peranakan Food such as Pie Tee (crispy cups topped with spicy salad).

READ MORE: The Top Foods You Should (And Maybe Shouldn’t) Get In Melaka When It Reopens For Tourists

Want a second part of the list where we’ll continue with the rest of the 6 states in Malaysia? Click below.

READ MORE: 14 Different Foods That You Should Taste In Each Malaysian State (Part 2)