The gift of a good soymilk maker is something to be shared. 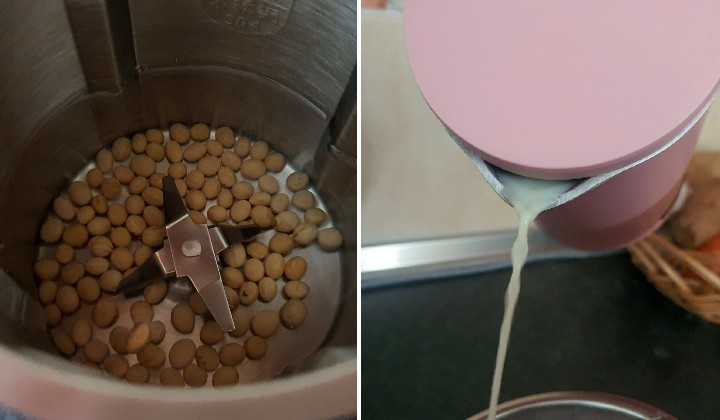 A friend gifted me a soymilk maker last month. They were considering a coffee machine instead, but I don’t drink coffee (I cling strongly to the stereotype of a tea-drinking writer).

It was a relatively unassuming small kitchen appliance about the size of a blender. The pastel pink colour added a beautiful pop of colour on my kitchen counter.

And I had no idea how to use it.

Although I had read the user manual twice over, I couldn’t really know how to use it. For starters, I didn’t have soybeans.

If you don’t know where to get them, most grocery stores have a dry grain section where they keep the green beans, red beans, lentils, etc. Soybeans will be somewhere here; plain yellow, round, and kind of boring. The good news is that they’re actually really cheap. I picked up 1kg of soybeans for under RM5.

The machine also comes with a little plastic spoon that tells you how much soybeans you should use per brew (about a tablespoon). So I just followed the instructions: one spoon of soybeans, fill up water to the line, and hit the start button.

The one thing I wasn’t sure of was how long it actually takes to “brew” a cup of soymilk. Is it something I leave overnight, like a slowcooker? Is it super fast, like brewing coffee?

It turned out to be something like 90 minutes before the piping hot soymilk was done.

The soymilk machine is actually kind of like a cooker-blender hybrid. It cooks and then grinds up the soybeans into pulp. (The machine will start short bursts of loud grinding. This is perfectly normal, although if you have cats, they might not take kindly to it.)

Yet the best thing about the machine is that you can forget about it, and even if you come back a couple of hours later, the soymilk will still be quite warm.

After using the soymilk maker and drinking super fresh soymilk every week, I can safely say that I am forever spoiled for good, fresh soymilk.

Fresh soymilk smells and tastes like a warm home in the most comforting of ways, kind of like freshly-baked bread.

Plus, you can control exactly how sweet you want it to be– I’ve found that just one to two teaspoons of sugar will do, which melts immediately in the hot soymilk. (If you want cold soymilk, you’ll need the extra step of bottling and chilling it in the fridge, of course.)

The one thing which I strongly recommended to have on hand is a strainer to catch the soybean pulp, otherwise your drink will take on a powdery texture.

There are cotton linens online (similar to those used for coffee), but any kind of fine mesh will do (I use a sieve). Basically, the finer the mesh, the smoother the soymilk.

These soymilk machines aren’t very expensive online (you can easily get one under RM200 on Lazada) and make a great gift for anyone who likes soymilk.

However, the machine I received had all their instructions and buttons in Mandarin– so do double check if there will be English user manuals provided.

Why Is This Enoki Butter Mushroom Recipe Going Viral? We Try It Out [Review]

Here Are The Top 3 Growing Food Trends On GrabFood

This New Rice Cooker Is “Smart”, But Is It Worth It? [Review]