This Enoki Butter Mushroom Recipe went viral these past few months when Zarina Anjoulie featured it in her TikTok video in August. 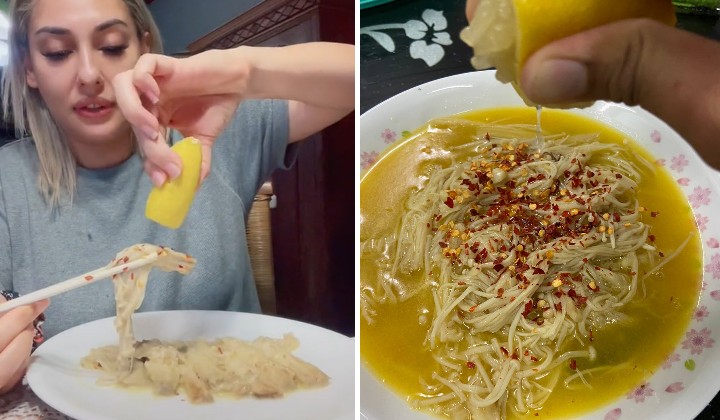 Have you heard of the viral recipe called Enoki Butter Mushrooms?

Yeap, it’s a simple two-main-ingredient recipe that’s cheap and also tasty (or so they say).

After scrolling through a lot of enoki butter mushroom recipes on my fyp, I finally decided to give the easy recipe a try.

The dish existed internationally quite a long time ago actually, it just recently became viral in Malaysia when a local actress, Zarina Anjoulie (@zarinaanjoulie_) featured it in one of her TikTok videos.

Zarina cooked hers to be similar to a replacement for noodles, but butter enoki is more often eaten as an appetizer or side dish instead of a whole meal on its own.

Starting then, a lot of people tried the simple recipe and some even credited the dish as Anju Butter Enoki.

So want to know what the hype is all about? Let’s give it a try.

How to make it

The only main ingredients you need are the enoki mushrooms and the butter. The others are truly optional and you can try to add or remove any other ingredients from the list if you like.

It was fairly easy to make and quite easy to eat. You have to eat it like a noodle, which makes it fun for me.

The first taste without the lemon was quite good. It’s like your regular butter prawn feel. Fatty, rich and crunchy.

Honestly, I only tasted the creaminess of the butter and the savouriness of the chicken stock (perfect combination). The taste of garlic, bird’s eye chilli or chilli flakes is not really there.

However, when I added the lemon, I think I went too far as it immediately became too sour for me. Should’ve toned down the lemon. The sourness overshadowed the other flavours.

It later became too jelak for me because of the richness of the butter. Don’t get me wrong, it’s a good kind of creaminess, but too much of anything can sometimes make you go 🤢.

I would probably recommend going easy on the lemon unless you like tangy things.

Additionally, watch the amount of water you use and maybe hold off on the second slab of butter. It turned out to be a lot of gravy in the dish. It’s not supposed to be a soup, actually…

Other than that, this is actually a pretty convenient recipe to do for snacks while watching Netflix or maybe an appetizer for a fancy meal. You can even eat it with rice if you’d like. Why not.

Try this recipe yourself and tell us what you think.