Vegetarians might soon be able to actually get a good meal in KFC. 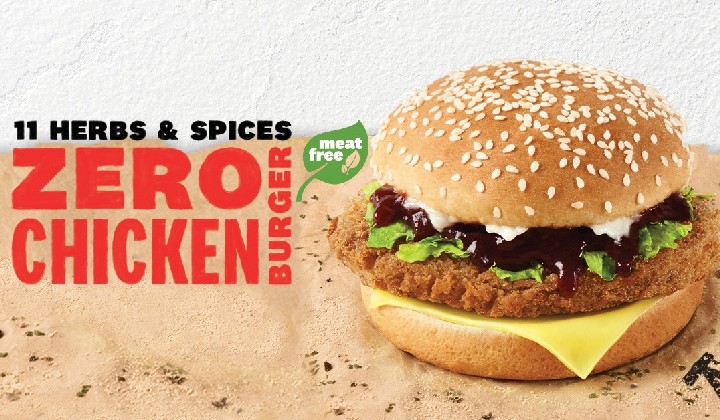 [UPDATE: KFC has clarified that the burger is NOT vegan or vegetarian-friendly as the meatless patty will be freshly prepared using the same cooking equipment as other KFC products.]

KFC dropped a teaser for a new burger that’s coming out next week on 9 February 2021, aptly named the Zero Chicken Burger.

Netizens quickly theorized that this was Malaysia’s introduction of a meatless burger. The Zero Chicken Burger was already introduced to our Singaporean neighbours a month ago, so naturally it made sense for us to get it next.

The Singaporean KFC website lists the meatless burger as the “same Original Recipe, but different on the inside”.

The Zero Chicken Burger boasts a meat-free patty, made with the Original Recipe of the 11 herbs and spices we know and love, topped with a slice of cheese and a splash of tangy BBQ sauce. It’s still finger licking good!

Are vegans and vegetarians impressed?

The burger seems to be vegetarian-friendly, but not vegan-friendly as it contains dairy and cheese.

However, even for vegetarians, the announcement brought more concerns.

The most pressing question was whether the same cooking oil would be used to cook the meat-free patty. KFC’s main selling point is, of course, their chicken. (It is in the name, after all.)

Vegetarians, whether they are practicing due to religion or a lifestyle choice, generally do not eat any food that has come into contact with meat, and that includes the oil that has been used to fry meat.

Needless to say, the cooking oil in their kitchens would have been used to fry real chicken pieces. Would KFC be able to provide clean cooking oil each time for their vegetarian patrons who order the meatless burger and to prevent cross-contamination?

Why the meat-free trend?

For a fast food chain that focuses on selling fried chicken, a specifically non-meat option might raise eyebrows.

But they’re certainly not the first to entice meat-lovers to try meatless options. Plenty of meat-free suppliers have taken the international market by storm, boasting extremely meaty textures that looks, smells, and even bleeds like real meat.

Although most vegetarians and vegans in Malaysia choose their diets due to religious reasons, the international trend towards meatlessness is due to a more complex mix of issues, from concerns over animal cruelty to carbon emissions. Many are not full vegetarians, but are flexitarians, who choose to stay meat-free but will eat meat on occasion.

These flexitarians will often miss eat meat, which is why these extremely meaty but meatless products exist, to imitate the texture and taste of real meat so closely but does not actually contain meat.

Still, whether or not KFC’s new meat-free burger will win over both meat-lovers and non-meat-lovers still remains to be seen.

Stay tuned to TRP for our review when it’s finally released!