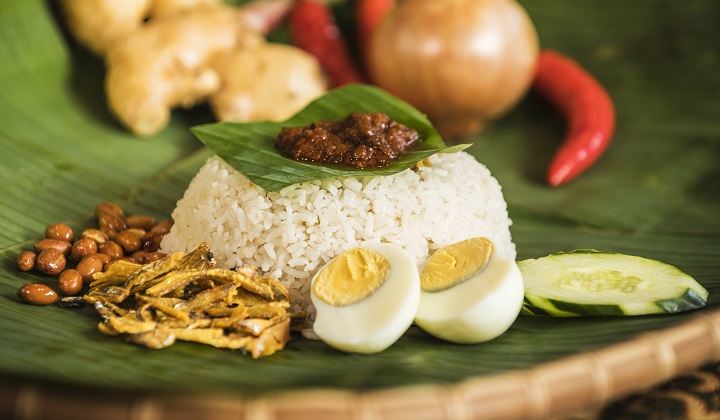 For Malaysians, the nasi lemak needs no introduction.

Weâ€™ve all relished in the hearty dish for breakfast, lunch, dinner or even as a â€œsnackâ€. But while gorging on that heady mix of coconut milk rice, spicy sambal, crispy anchovies, nuts and a shiny boiled egg, did you ever wonder who was the beautiful genius who came up with this masterpiece?

Because we sure did, and hereâ€™s a couple of theories weâ€™ve managed to unearth.

The story that many Malaysians have heard of is the tale of Mak Kuntum and Seri â€“ the widow and her daughter who lived in a small village in Malacca during the Malaccan Sultanate (1400 â€“ 1511).

As the story goes, Mak Kuntum had to go out to work, leaving her daughter Seri to care for the household. One day while cooking, Seri accidentally spilled coconut milk into a boiling pot of rice.

When Mak Kuntum returned home to a fragrant pot of rice, she asked; â€œApa kau masak ni, Seri?â€ (What did you cook, Seri?). To which Seri replied; â€œNasi le, Mak!â€ (Itâ€™s rice, mother!).

While this tale may be a cute little story, there actually could be some truth to it.

The main ingredients of nasi lemak, like coconut milk, rice and anchovies are naturally found in the region. However, the all-important sambal itself is a relatively modern creation, simply because chillies are not native to Southeast Asia.

In fact, the spicy plant was only introduced in the 15th century by Portuguese traders to this region following the discovery of the Americas and their chilli peppers by European colonisers in the late 1400s.

As the Malacca was a prime hub in the trade routes of the time, the introduction of chillies to Malay cuisine coincides with the backdrop of the folk tale of Seri’s accidental nasi lemak.

In an interview with The Star, Nadge divulged that his research pointed to origins on the west coast of Peninsular Malaysia.

As a traditionally agrarian society, villagers required a substantial amount of food to keep them satiated and fuelled for a day of working the fields.

With the carbohydrate-rich rice with proteins from the anchovies and oils from the sambal, Nadge postulates that this combination kept the farmers full and well nourished.

In modern history, Nasi Lemak can be traced back to 1909, when it was first mentioned in a book titled â€œThe Circumstances of Malay Lifeâ€ by Sir Richard Olof Winstedt.

The British administrator with a strong fascination for Malay folklore, history and language noted that nasi lemak was served at weddings and local festivals.

The first printed mention of nasi lemak can be found in The Straits Times newspaper dated 21st July 1935 in an article describing the Malay Market in Kampung Baru.

While the fate of that particular nasi lemak stall is unknown, Kampung Baruâ€™s nasi lemak claim to fame is Nasi Lemak Antarabangsa â€“ the longest running nasi lemak restaurant in KL since its establishment in 1973.

Just as the farmers had been fuelled by nasi lemak to work the fields, workers post World War 2 also found a hearty breakfast in nasi lemak.

An article in The Straits Times titled â€œThe Workerâ€™s Breakfastâ€ from November 1946 describes how packets of nasi lemak are sold in the mornings and eaten with fried prawns and sambal.

But how exactly did nasi lemak rise to become the face of Malaysian food?

The major draw of the dish is that it’s incredibly versatile and easy to cook. Once you have the basic coconut rice, egg, cucumber slices, sambal, fried anchovies and nuts, nasi lemak is quite receptive to additional sides and tweaks according to one’s personal taste.

A study on the dish also revealed that the preference of nasi lemak is relatively popular across the countryâ€™s ethnocultural groups with each community having their own interpretation of the dish. Various iterations of the nasi lemak include fried chicken, seafood to vegetarian and even non-halal versions.

However, a French research paper postulates that nasi lemak’s status as the countryâ€™s national dish is most likely due rise of Malaysiaâ€™s middle class.

The paper on social relevance of nasi lemak in Malaysia points out that the middle and upper classes of a society often drive the promotion of local cuisines in response to increased food modernisation. It also helps that nasi lemak is practically ubiquitous in Malaysia, further fuelling its popularity.

While there are many reasons for nasi lemak’s superstardom, its true power lies in its ability to form a connection with Malaysians. After all, nothing unites us all more than food!