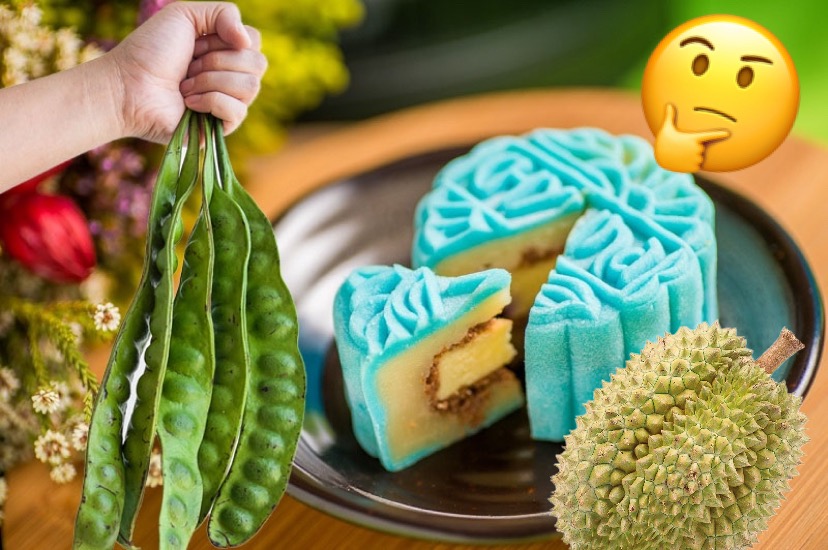 Ah, itâ€™s that time of the year again! As the Mid Autumn Festival beckons closer, we notice how increasingly on edge our parents get as they rush for mooncake orders and spring cleaning for when all the relatives visit.

For the rest of us though we only have one thing on our mind; FOOD!

However, instead of sticking to the usual orders of mooncake this yearâ€” how about branching out and trying something new? After all, nothingâ€™s quite the conversational starter than, â€œWould you like to try our special mooncakes?â€ Might save you from the dreaded â€œGot boyfriend/girlfriend already ahâ€ questionsâ€¦

Oh yeah, they went there. The durian craze seems to be reaching new levels daily, with all sorts of food being worked into it. Now durian lovers can rejoice; as now you can enjoy durians even in your mooncakes!

Tai Thongâ€™s Snow Skin Durian Coulis is everything a durian fan would want to see at a family reunion table; and weâ€™ve heard that apparently the â€˜fragranceâ€™ is stronger than the actual fruit itself!

But if this isnâ€™t enough for you, they also have the Imperial Musang King Royaleâ€” which is just a mooncake filled with durian flesh. Time to dig in!

Looks like Inside Scoop is redefining what it means to have a mooncake. The ice cream connoisseurs have whipped up their latest invention of ice cream mooncakes to go with the season!

The mooncake launch features 4 different flavours; Matcha with Black Sesame Yolk, Unicorn with Raspberry Yolk, Rocher with Crunchy Base, and (of course) Durian with Chocolate Yolk.

The handcrafted ice cream mooncakes are petite and perfect for the occasionâ€¦ unless you feel that you will be needing more than just that.

In that case, Inside Scoop also has the Super Moon Cakeâ€” which is bigger than the size of an average personâ€™s face! This way, rest assured, everyone in the family will be able to try a slice.

Spice up your life with a change of flavour this year! Nobu Kuala Lumpur has decided to switch it up this season by offering a Japanese touch to the usual Chinese classics.

By changing up the usual flavours that traditional mooncakes opt for, you can prep your tastebuds for a whole new experience once a slice reaches your mouth. So, what do you reckon? Anyone willing to take on the heat?

You probably already saw our post about this yesterday, but Petai Mooncake is apparently a thing and business is a-booming!

This invention comes from an Ipoh aunty named Jennifer Chung who makes them from her own home. An idea born from her fatherâ€™s love for the small stink bombs, Aunty Jennifer put her creativeness together and decided to surprise him for the Mid-Autumn Festival!

The Petai Mooncake is made of 3 vital ingredients; potato, dried sambal shrimpsâ€” and of course, the main starâ€” petai. If youâ€™re a petai fiend yourself, perhaps its time to indulge this year with something that will leave the entire family begging you to buy mouthwash.

Remember when you were a little kid and used to think that blue was a flavour? No? Just us? Okay well, putting that aside, Hilton Kuala Lumpur has brought back their much awaited mooncakes this year!

Aside from being extremely aesthetically pleasing, the Blue Moon mooncake is a Snow Skin Amaretto Lotus Paste with Blueberry Cheese Feuillantine.

This mooncake is bound to be the talk of your family reunion with how the colour itself making it stand out from miles away, but also because of the blueberry cheese filling! Talk about a fulfilling dessert, eh?

Seems like The Beer Factory isnâ€™t done with their wild adventures in the food and beverage industry!

The same people who brought â€œBeer Bobaâ€ a while back, have teamed up with Guinness to release a Black Snowskin with Guinness Infused Chocolate Lotus Paste.

Sounds delicious, right? If youâ€™re fan of Guinness then you might want to hurry and get your hands on these in time.Â

With all of these options in mind, it looks like youâ€™re bound to have an extra special Mid-Autumn Festival this year. From tons of flavours; the classics or something new and excitingâ€” thereâ€™s something for everyone in the family to enjoy!

What Kind Of Tea Goes Best With Mooncake?