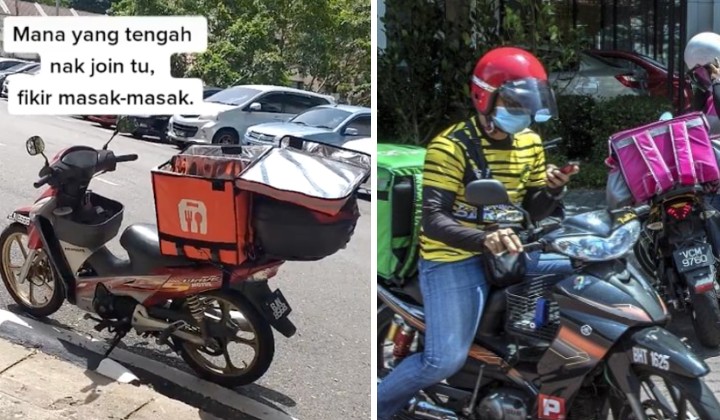 It is said that being a food delivery rider can earn you a salary comparable, and even more, than some white-collar workers.

However, the demand for food delivery riders has dropped tremendously since the government announced early this year that it would not reimpose the movement control order (MCO).

In addition, the increasing number of food delivery riders has also stiffened competition and reduced their income.

Recently, one of them took to social media to advise young people to think twice before joining the industry.

A TikTok user named @wak_east expressed deep concern that many young people are interested in the job.

No Bed Of Roses

He said they only see the positive side where you only need a motorcycle and a license.

The job is easy as you only need to deliver orders to the customer’s location, and offers flexible working hours.

Many have also been lured by tales of high pay, even more than professionals such as engineers.

However, many people do not know the untold burdens behind the job.

The man said the job is, in fact, very tiring, not to mention that orders are decreasing by the day as people prefer to eat out.

Worse, working hours are more about waiting for incoming orders than delivering food.

They also had to work 13 to 15 hours to reach the target.

Concerned about the future of young people, he advises them to think hard and find a permanent job to ensure a better future.

At the time of writing, the 20-second TikTok post has garnered more than 70,000 thousand views and 230 comments.

Netizens who commented included those who work as food delivery riders, who acknowledged the various challenges.

Some commenters said the number of customers is still the same, but it’s harder to make a living as there are too many food delivery riders.

Many agreed with @wak_east that youngsters should study as much as possible instead of just studying until SPM level.

Some said they had to deal with customers who were impatient and would make complaints because of unrealistic expectations.

At the same time, some said food delivery riders are also vulnerable to crimes, accidents and road rage.

And then some can’t afford a motorcycle when their bike is stolen or pay for the repair if it is broken.

How To Make a Career Choice When You Are Undecided

At the end of the day, each job has its advantages and disadvantages.

First, you need to know if you have the aptitude for the work.

For example, you will have difficulty in engineering or physics if you are bad at math.

You may love it, but are you good enough that it will pay the bills?

Second, you need to consider if you would like the work.

If you are good at something but hate doing it, that might suggest finding another career.

Third, you need to consider your career prospects.

Is the field you are considering saturated? If so, finding a job related to your interests might be challenging.