Police recovered evidence of the crime from a CCTV’s internal memory. 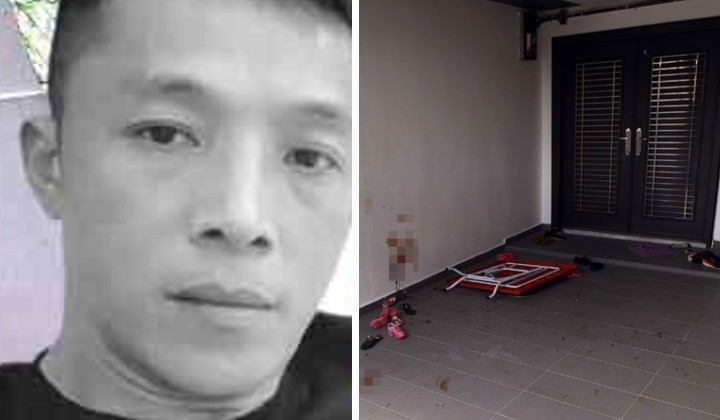 Money – just like love, drugs, and alcohol – can make us do crazy (and often stupid) things.

A woman is suspected of murdering her husband for insurance money by stabbing him 14 times on his chest, arms and face.

She then tried to cover up the crime by faking a robbery.

The courtyard where the murder took place was a mess, and there were still bloodstains left after the incident.

After the man was stabbed 14 times by the murderer, he ran out of the house to get help.

He tried to climb over the wall for help but eventually fell dead in front of the door.

According to an exclusive report by China Press, the case occurred at 1.40am on 15 September in a single-storey terrace house in Taman Aneka Baru, Klang.

It is understood that the deceased is 41 years old and worked as a towman and auto parts salesman.

After the murder, the wife instructed the murderer to remove the closed-circuit television hard drive in the house to destroy evidence.

When the neighbours heard the noise and went out to investigate, they followed the bloody handprints left by the deceased on the wall.

They found the deceased lying on the ground, and immediately called the police.

Covering Up A Crime

The courtyard where the murder occurred was a mess, and there were still bloodstains left after the incident.

After the police arrived, the wife pretended to be deeply saddened by her husband’s death.

When questioned by the police, she claimed that her husband was stabbed to death by two Indian robbers.

The police then sealed off the scene to investigate and called the police dog team to search for evidence but found no clues.

The scientific forensics team also took blood marks on the scene and sent them for testing.

The truth came to light when police found a recording from the CCTV’s internal memory.

After obtaining key evidence, the police arrested the wife and two murder suspects.

Police also found a BMW car which was driven off to Negeri Sembilan by the suspects after the crime.

The inside of the car was covered in blood when the police found it.

Police are currently investigating the case under Sections 302 (murder), 395 (gang robbery) and 367 (armed robbery) of the Penal Code.

The deceased’s body was sent to the Shah Alam Hospital mortuary for an autopsy to determine the cause of death.

Appearances Can Be Deceiving

Meanwhile, neighbours said they were shocked by the crime.

They said the couple seemed loving and would often take a walk together outside the house.

It is also learned that they have three children, all under the age of six.

At the time of the incident, the eldest daughter was not at home, and the other two children were in the room.

They added that the victim cherished his Mercedes-Benz sedan and washed the car outside the house almost daily.

And in the evening, the two couples would walk together.

In the eyes of outsiders, they were a loving couple.