Netizens argued that the suspect would have been shamed by media if she was Malay. 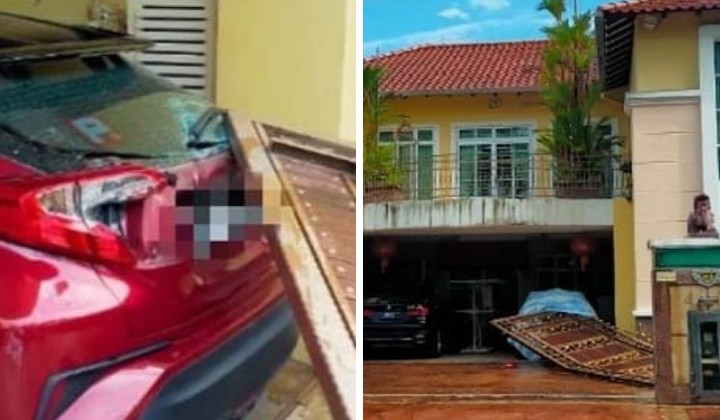 In Johor Bahru, a local woman was arrested after being suspected of threatening and crashing into the automatic gate of her ex-boyfriend’s family residence.

The incident happened in Taman Perling on 14 August at about 5.00 am.

She was detained following a complaint made by her ex-boyfriend’s sister about the incident about an hour and a half before.

He said in a statement that a member of the complainant’s family had also received threats from the woman.

She had threatened to burn the business premises and damage her family’s property.

Acting on that information, a police team went to the complainant’s family home and found that a Toyota Corolla Altis car driven by the woman had crashed into the automatic gate of the residence until it was pulled off before trying to escape.

However, the police followed and managed to arrest the woman.

The investigation found that she was the former lover of the complainant’s younger brother before their relationship broke up last month.

According to Fariz Ammar, the woman had no previous record, but the initial urine screening showed her positive for the banned drug benzo.

She was also found to have sent a video recording showing an individual pouring liquid suspected to be gasoline in front of the family’s home before the complainant filed a police report.

The woman’s actions were also recorded through closed circuit recording, which showed that she rammed the automatic gate until she hit the car belonging to the complainant’s father and caused damage and losses estimated at RM15,000.

The case is being investigated under Section 506 of the Penal Code (KK), which carries a maximum prison sentence of seven years, a fine, or both.

At the same time, police are investigating under Section 427 of the Criminal Code, which provides for a prison sentence of not less than one year and a maximum of five years, a fine, or both if convicted.

The case is also being investigated under Section 15 (1) (a) of the Dangerous Drugs Act 1952, which can be fined not more than RM5,000 or a maximum of two years in prison if convicted.

The woman has been remanded for four days starting yesterday (15 August).

The incident caught the attention of netizens who were curious about the woman’s brazenness.

The woman’s ethnicity also became a topic, with some saying it’s unusual as predominantly Malay women get into drug trouble.

Some claimed that the woman’s photo, presumably in handcuff, would have been shown by the media if she was Malay.

They added that the suspect’s details, such as name and address, were not published only because she is Chinese.